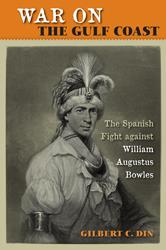 War on the Gulf Coast:
The Spanish Fight against William Augustus Bowles

"Using a plethora of previously unexamined documents from a number of archives, this work provides the first clear understanding of William Augustus Bowles and his exploits along the Spanish Gulf Coast and among the Creek Indians, demonstrating unequivocally that the glory-seeking adventurer was not the tragic heroic figure that he and previous historians have claimed."--F. Todd Smith, University of North Texas

War on the Gulf Coast is one of the first books about the Spanish period in West Florida (1797-1805) written from the Spanish point of view. Using Spanish archival sources, Gilbert Din is able to shed new light on the machinations of William Augustus Bowles, an adventurer who sought to introduce goods, subvert the Creek Indians, and deprive the Spaniards of territory.
By revealing the inner workings of the Spanish military establishment, Din makes a convincing case that West Florida--which then stretched all the way to the Mississippi River--was a vital zone of international intrigue, not an unimportant backwater. He also offers a much-needed corrective to previous depictions of Bowles, questioning his actual influence among the Creek Nation. Din highlights the naval efforts to curtail smuggling and capture Bowles and counters prevailing wisdom about why the Spanish were forced to surrender at Fort San Marcos.

Gilbert C. Din is professor emeritus of history at Fort Lewis College (Colorado). He is the author of Spaniards, Planters, and Slaves: The Spanish Regulation of Slavery in Louisiana, 1763-1803, which won the General L. Kemper and Leila Williams Award for the best book on Louisiana history.

"a good starting point for examining the historical processes that resulted in the dynamic meeting places of empire and native peples of the Apalache region, the far northeast Spanish possessions, and West and East Florida.
--H-Net Reviews

"Din's excellent updating and correcting of [previous] research and conclusions are a perfect reflection on how history is written and constantly changing."
--Joe Knetsch, Journal of America's Military Past

"An important volume for all historians concerned with Spain's policy vis-à-vis southern Indian peoples."
--The Journal of Southern History

“An intriguing story of the contested Gulf Coast borderlands through the Spanish point of view… illuminates not only the battle against William Augustus Bowles but also highlights the tenuous Spanish hold of Florida at the turn of the nineteenth century.”
--Southern Historian

Provides what may well be the last word on how the Spaniards dealt with Bowles and his mostly Lower Creek allies.
--Louisiana History