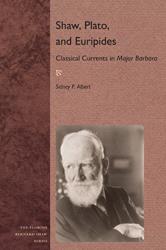 "Explores a fascinating and important aspect of Shaw's worldview: one that is indebted to the ideology and philosophy of ancient Greece."--Michel Pharand, author of Bernard Shaw and the French

Ever since its 1905 premiere on the London stage, Bernard Shaw's controversial drama Major Barbara has proved puzzling to audiences and critics alike. More than a century later there is still wide critical disagreement about the play's meaning and the ideas it engenders. Sidney Albert’s groundbreaking new book provides a daring and novel reading of this work. By tracing the extensive connections between Shaw's play and two canonical ancient Greek texts--Plato's Republic and Euripides’s Bacchae--Albert reveals deeper dimensions of the work.
Albert demonstrates the influence these classics had on Shaw's development as an artist and philosopher. He explores the Dionysian and Platonic elements in Major Barbara to illuminate how classical themes were modernized by Shaw. While examining the interrelations of the central characters in their social settings, Shaw, Plato, and Euripides searches out the complex layers of meaning in one of Shaw's most enigmatic dramas. Albert convincingly reveals Shaw's interaction with Greek thought in a way that reconfirms ancient wisdom and yet goes beyond it, adapting it to the social, political, and humanistic perspectives of the modern world.

Sidney P. Albert is professor emeritus of philosophy at California State University, Los Angeles. A founding member of the International Shaw Society and a former member of the Shaw Review editorial board, and a frequent contributor to Shaw: The Annual of Bernard Shaw Studies, he is widely recognized as a leading authority on the dramas of Bernard Shaw.

"For a volume that is so tightly focused on one work, its perspective is suprisingly -- and satisfyingly -- expansive…demonstrates a mode of reading Shaw's drama, a perspective on the depth of the playwright's achievement measured by the breadth of its various resonances… Albert's Shaw is far more than a writer of pointed philosophical and political comedies. He is a playwright of mythic scope, his signature work is a drama of epic dimensions."
--Comparative Drama

"A remarkable product of long-term accumulated scholarship, embodying as it does Albert's erudition in the fields of philosophy, classics, and drama that he began amassing in the 1930s, sharpened into a focus on Shaw and Major Barbara in the 1960s, and completely only in early 2012."
--Shaw Annual

"Long-awaited monograph...encapsulates a lifetime of reading and writing about the enigmatic and provocative play…takes seriously the classical allusions and mythical structures in the play and follows the clues that Shaw dropped throughout the play text to uncover and highlight the mythic structure and form that he sees as a controlling feature of Shaw's masterpiece."
--Text and Presentation