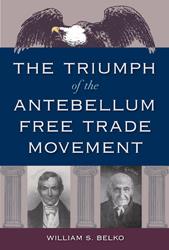 "An informative and useful history of the antebellum free trade movement that succeeded in turning back a protectionist tide in the early 1830s. This book will be of great interest to those interested in how this intense North-South conflict was defused, setting the stage for the debates over slavery in subsequent decades."--Douglas Irwin, author of Free Trade under Fire

In the wake of the War of 1812, the Madison and Monroe administrations oversaw the institution of a series of protective tariffs meant to shield fledgling American industries from British product "dumping." While southerners supported these protectionist measures early on, they quickly came to disapprove of them as severe impediments to trade with the West Indies, an important source of sugar cane and tobacco. In the decades that followed, tariffs became a hotly contested issue, the North favoring protectionism and the South advocating for free trade.
In The Triumph of the Antebellum Free Trade Movement, William Belko provides a full and detailed investigation into the heated tariff debate of the late 1820s and early 1830s, focusing on its fascinating climax: the Philadelphia Free Trade Convention of 1831. As such, this intriguing volume is the first in-depth examination of the events directly preceding the famous Compromise Tariffs that sought to bind Americans together, but ultimately hastened the loosening of the cords of the Union.

William S. Belko is associate professor of history at the University of West Florida. He is the author of The Invincible Duff Green: Whig of the West and the editor of America's Hundred Years' War: U.S. Expansion to the Gulf Coast and the Fate of the Seminole, 1763-1858.

"Clearly written.…Will be interesting to readers in US economic and political history."
--Book News

"Interesting and informative."
--The Journal of American History