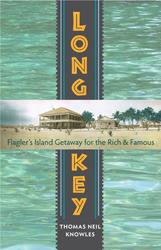 Long Key:
Flagler’s Island Getaway for the Rich and Famous

"Located midway down the Florida Keys, Long Key Fishing Camp was created by Henry M. Flagler as a retreat for those wealthy winter visitors who wished to experience solitude on a desert island and those who came seeking to do battle with swordfish and tarpon. Then the Labor Day Hurricane of 1935 swept over Long Key, destroying the camp but creating an incredible tale of survival for those trapped on the island."--Thomas Graham, author of Flagler's St. Augustine Hotels

"Takes us down an interesting byway of the Flagler empire that shaped modern Florida."-- David Nolan, author of The Houses of St. Augustine

"Expertly captures the rich and textured story of Long Key. I commend Knowles for producing one of the best Florida history books I have ever read."--Jerry Wilkinson, president, Historical Preservation Society of the Upper Keys

With a modest two-story hotel and various small cottages, Long Key Fishing Camp offered a dramatic departure from the usual opulence of Henry Flagler's hotels. Palatial structures with manicured grounds, extravagant recreational facilities, and world-class amenities were the norm at Flagler's other hotels that dotted the east coast of Florida--but not at Long Key, the last resort to open during his lifetime. Prospective visitors were frankly warned not to expect the same level of comfort provided at sister properties. Yet still they came.

Carefully researched and packed with photographs and maps never before published, Long Key offers the first history of this unique destination. Historian Thomas Knowles recounts the extraordinary tale of how a railroad work camp became a world-renowned sportfishing center and a preferred vacation spot of a cadre of well-to-do individuals that included businessmen, poets, nobles, and politicians.

This rustic island, with its unparalleled fishing grounds and cabins named after local fish-- "The Kingfish," "The Porpoise," "The Barracoota," "The Shark"--inspired fierce loyalty among its diverse and distinctive clientele, even during the dark years of the Great Depression. Zane Grey, Lou Gehrig, Wallace Stevens, Charles Kettering, Andrew Mellon, and Herbert Hoover were among those who would board the Florida East Coast Railway to visit this paradisiacal setting, many of them to return season after season.

Completely destroyed by the fatal 1935 Labor Day Hurricane, the first documented category 5 storm to make landfall in the United States, Flagler's unique island getaway has been largely forgotten. Knowles expertly depicts this slice of long-lost Florida and resurrects the famous personalities who found refuge from the limelight at Long Key.

Thomas Neil Knowles is the author of Category 5: The 1935 Labor Day Hurricane. Born and raised in Key West, he is a fourth-generation Conch whose ancestors moved from the Bahamas to the island in the mid-1800s. He now lives in Tallahassee.

“Evocative archaeology, a reminder of a time when travel, while onerous in its way, was a gentler pursuit for genteel folk…a poignant reminder of three decades of glorious simplicity”
--New York Post