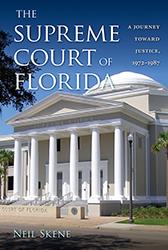 
“[A] timeless. . . . entertaining, scholarly look at this historic era in Florida law.”—Tallahassee Democrat

“A highly readable portrait of a crucial time in the history of the state high court. It brings to life the jurists and lawyers who contributed so much to contemporary Florida law.”—Mary Ziegler, author of After Roe: The Lost History of the Abortion Debate

“A richly sourced, thoroughly researched, and entertaining account of one of the most significant eras in the history of what is arguably the most important (and least reported) branch of Florida government. Tells not only how the court’s decisions impact people’s lives but also how the personalities and life experience of new justices lead to evolutions in the law.”—Martin A. Dyckman, author of A Most Disorderly Court: Scandal and Reform in the Florida Judiciary

“Necessary reading for anyone interested in law and politics in Florida. Makes historical figures come alive.”—Jon L. Mills, author of Privacy in the New Media Age

This third volume in the history of the Florida Supreme Court describes the court during its most tumultuous years. Amid the upheaval of the civil rights movement, the Vietnam War, and Watergate, the story begins with reform in the Florida court system. It includes the court’s first black justice, Joseph Hatchett; Governor Reubin Askew’s new system for merit selection of justices; and revision of Article V, the section of the state constitution dealing with the judiciary.

Neil Skene details landmark court decisions; the introduction of cameras in court; changes to media law, personal injury law, and family and divorce law; privacy rights; gay rights; death penalty cases; and the appointment of the first female justice, Rosemary Barkett. Shining a light on the often invisible work that informs the law, Skene recognizes lawyers and lower-court judges whose arguments and opinions have shaped court rulings. He integrates firsthand stories from justices with documents, articles, and cases. The result is an absorbing portrayal of a judicial institution adapting to a turbulent time of deep political and social change.

Neil Skene, former president and publisher of Congressional Quarterly Inc., is senior deputy director of the  Illinois Department of Children and Family Services.

Discusses around 300 cases that the court decided, including family law, constitutional rights, public records, family tort, sovereign immunity, and death penalty cases. . . . Should appeal to lawyers and to non-lawyers, which bespeaks its first-rate quality.
--Paraclete