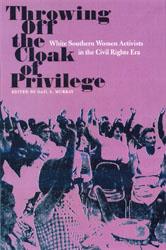 Throwing Off the Cloak of Privilege:
White Southern Women Activists in the Civil Rights Era

"Rich and insightful assessments of southern white women of privilege who chose to throw off the mantle of protection provided by race in order to address critical issues in southern society and politics."--Nancy Hewitt, Rutgers University

While playing the southern lady for the white political establishment, thousands of mostly middle-class, middle-aged, married white women become grassroots activists in America's civil rights movement, sometimes at the cost of friendships, status, economic security, and family support. The original essays in this collection tell who these women were, why they became committed to racial justice and equal opportunity, and how they organized to change southern society.

The women worked within a range of national and local institutions, both segregated and biracial. Their stories, largely unknown, span half of the 20th century from the New Deal to the early 1970s and took place across the South from Louisville to New Orleans. Some of them brought years of experience in church groups or welfare organizations to the movement; others became converts only when local crises forced them to examine the hypocrisy and privilege of their lives. Some couched their civil rights arguments in terms of their maternal identity and a belief that racial discrimination defiled the world in which they reared their children. Many shared a basic optimism about the willingness of white southerners to change. And many were well aware that their leisure to pursue reform activities often was made possible by the black women who managed their households, cooked their food, and tended their children.

Four essays profile specific women and their personal strategies for attacking prejudice and discrimination. The remaining essays focus on particular organizations, such as the YWCA, United Church Women, the Women's Emergency Committee to Open Our Schools, and the Saturday Luncheon Club, a group whose name belied its subversive intentions. Using autobiography, oral history, news accounts, organization papers, and personal letters, the contributors show the importance of female support networks, the influence of African American mentors, and the social ostracism that resulted from defying white supremacy.

In the ongoing struggle for human dignity and a voice in American life, this book adds a new and necessary dimension to our understanding of both biracial activism and white anti-racism.

"Every college and university library should purchase this book, which also merits consideration as supplemental reading for courses on the Civil Rights Movement and southern women's history." "Highly recommended."
--Choice

"Throwing of the Cloak of Privilege should be included on reading lists for women's history courses and courses on the civil rights movement. Its reevaluations of elite and privileged women are an important contribution to those histories, for the cloak of privilege was transformed into the cloak of empowerment for all women--black, white, Asian, Latina. It should be considered a valuable resource for research and for the classroom."
--Arkansas Historical Quarterly

"A welcome contribution to the continuing study of white women's roles in the civil rights movement."
--The South Carolina Historical Magazine

"Murray and the other authors in the volume have done a fine job illustrating the complexity of white Southern responses to the civil rights movement."
--H-Net/H-South

"If the modern civil rights movement was indeed a revolution, especially for the South, then our understanding of its history must include how the struggle for racial justice changed the region.Throwing off the Cloak of Privilege provides a way to grasp the scope of the South's transformation through the study of white women activists and the organizations they led and joined….This is an important compilation."
--Journal of Southern History

"A welcome addition to civil rights literature. It presents an interesting perspective on the Civil Rights Movement and the diversity of its participants. This book illustrates the important contributions that white southern women made... Overall, this anthology provides a wonderful contribution both to civil rights and women's historiography."
--Southern Historian

"The authors in Throwing Off the Cloak of Privilege make strong cases for the women's ability to create grassroots leadership, influence people, and build cross-racial relationships (all during the years of the feminine mystique, I might add). As editor Murray states, the story of the white progressive response to black activism is part of the story of the civil rights movement."
--Signs

"A fine addition to the literature of the civil rights movement."
--American Historical Review

"This volume firmly established the longevity of women's organizations as agents of progressive social change, something often neglected in histories of the civil rights movement."
--The Journal of American History