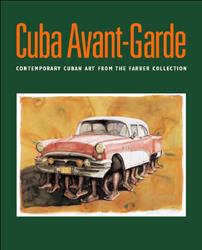 This volume presents over 70 color photographs of contemporary Cuban art drawn from the distinguished collection of Howard and Patricia Farber (New York and Miami Beach). Created primarily during the 1980s, 1990s, and early 2000s, these evocative works represent the combination of utopian impulses and dystopian realities, the ruptures and new beginnings that have characterized Cuban art. Although the underlying issues are serious, many of the works are imbued with a sense of humor and irony, and all demonstrate a clear commitment to the Cuban homeland.

Among the 42 Cuban-born artists represented in the exhibition are many internationally renowned figures, such as Jose Bedia, Antonio Fernandez (Tonel), Los Carpinteros, Tania Bruguera, Carlos Garaicoa, Alexis Leyva (Kcho), Luis Cruz Azaceta, and Elsa Mora. Approximately half of the artists currently reside in Cuba, while the other half reside outside Cuba in countries such as Spain, Mexico, and the United States.

The artworks in the exhibition encompass a broad range of media, including paintings, drawings, prints, photographs, sculptures, and mixed-media installations, and the accompanying bilingual text includes essays by Kerry Oliver-Smith, curator of contemporary art at the Harn Museum of Art and curator of the exhibition "Cuba Avant-Garde: Contemporary Cuban Art from The Farber Collection," and Abelardo Mena, curator of contemporary art at the National Museum in Havana. Also included are essays by Magda Gonzalez-Mora, a founder of the Wifredo Lam Contemporary Art Center, Havana, and an independent curator based in Havana and Toronto.

"A nicely produced, informative catalogue for anyone interested in this art production."
--Bulletin of Latin American Research