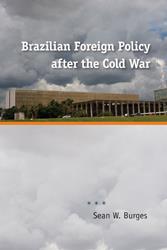 "Draws on a wide array of U.S. and Brazilian sources and interviews and effectively uses Gramsci's concept of consensual hegemony to demonstrate the degree to which the region's largest power has expanded its role in South America. Carefully crafted and clearly written, this study stands as the definitive treatment of the subject."--David Scott Palmer, Boston University

Since 1992--the end of the Cold War--Brazil has been slowly and quietly carving a niche for itself in the international community: that of a regional leader in Latin America. How and why is the subject of Sean Burges's investigations.

Under President Fernando Henrique Cardoso, Brazil embarked on a new direction vis-à-vis foreign policy. Brazilian diplomats set out to lead South America and the global south without actively claiming leadership or incurring the associated costs. They did so to protect Brazil's national autonomy in an ever-changing political climate.

Burges utilizes recently declassified documents and in-depth interviews with Brazilian leaders to track the adoption and implementation of Brazil's South American foreign policy and to explain the origins of this trajectory. Leadership and desire to lead have, until recently, been a contentious and forcefully disavowed ambition for Brazilian diplomats. Burges dispels this illusion and provides a framework for understanding the conduct and ambitions of Brazilian foreign policy that can be applied to the wider global arena.

"An important, well-documented book. The intergration of interviews with Brazilian officials and diplomats into the text is especially impressive."
--Choice

"Affords a very useful framework for understanding the factors that have impelled the emergence of Brazil in recent years as a formative member of the Group of 20 developing countries, as a leading exponent of South-South cooperation, and as an aspirant for a permanent seat on a restructured UN Security Council."
--International Affairs

Burges proposes a sophisticated interpretation of the type of regional leadership that Brazil has exerted.
--Latin American Research Review