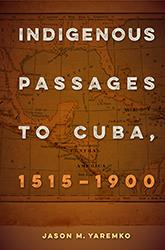 "Portrays the vitality and dynamism of indigenous actors in what is arguably one of the most foundational and central zones in the making of modern world history: the Caribbean."--Maximilian C. Forte, author of Ruins of Absence, Presence of Caribs

"Brings together historical analysis and the compelling stories of individuals and families that labored in the island economies of the Caribbean."--Cynthia Radding, coeditor of Borderlands in World History, 1700-1914


During the colonial period, thousands of North American native peoples traveled to Cuba independently as traders, diplomats, missionary candidates, immigrants, or refugees; others were forcibly transported as captives, slaves, indentured laborers, or prisoners of war. Over the half millennium after Spanish contact, Cuba also served as the principal destination and residence of peoples as diverse as the Yucatec Mayas of Mexico; the Calusa, Timucua, Creek, and Seminole peoples of Florida; and the Apache and Puebloan cultures of the northern provinces of New Spain. Many settled in pueblos or villages in Cuba that endured and evolved into the nineteenth century as urban centers, later populated by indigenous and immigrant Amerindian descendants and even their mestizo, or mixed-blood, progeny.


In this first comprehensive history of the Amerindian diaspora in Cuba, Jason Yaremko presents the dynamics of indigenous movements and migrations from several regions of North America from the sixteenth through nineteenth centuries. In addition to detailing the various motives influencing aboriginal migratory processes, Yaremko uses these case studies to argue that Amerindians--whether voluntary or involuntary migrants--become diasporic through common experiences of dispossession, displacement, and alienation within Cuban colonial society. Yet, far from being merely passive victims acted upon, he argues that indigenous peoples were cognizant agents still capable of exercising power and influence to act in the interests of their communities. His narrative of their multifaceted and dynamic experiences of survival, adaptation, resistance, and negotiation within Cuban colonial society adds deeply to the history of transculturation in Cuba, and to our understanding of indigenous peoples, migration, and diaspora in the wider Caribbean world.

Jason M. Yaremko, associate professor of history at the University of Winnipeg, is the author of U.S. Protestant Missions in Cuba.

This book is a revelation! . . . Documents and recounts in rich detail the large, diverse range of Native peoples who migrated from the North American mainland (Florida and the US Southwest when under Spanish rule) and especially from Mesoamerica (Mexico and Central America) to the Caribbean. . . . Highly recommmended.
--Choice

Positions the Caribbean more centrally in the Western Hemisphere’s often-deplorable tradition of relocated populations and nudges us out of the old black-white Cuba story. The next time you dip back to island history, think black-white-Maya-Athapaskan-Creek, for starters.
--Hispanic American Historical Review

Invites us to rethink how colonialism forced some Amerindians far from their ancestral homelands but nonetheless situated them as important actors in Cuban history.
--Journal of Native American and Indigenous Studies

Provides a rich historical account of Cuban Indigenous diasporas that powerfully depicts the scope and complexity of transnational Indigenous social relations in the Americas.
--NAIS

U.S. Protestant Missions in Cuba: From Independence to Castro