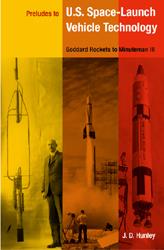 "These two volumes tell the compelling story of the events, people, and technology that evolved from the missile programs to the U.S. space boosters that impact every aspect of our daily lives. They also delineate the successful management techniques that produced some of the most expensive and complex systems ever developed."--Robert L. Geisler, Air Force Propulsion Laboratory (retired)

For nearly fifty years, a wide range of missiles and rockets has propelled U.S. satellites and spacecraft into the sky. J. D. Hunley's two-volume work traces the evolution of this technology, from Robert Goddard's research in the 1920s through the development of the Titan missiles and launch vehicles in the 1960s to the refinement of the space shuttle in the 1980s.

With the first book devoted primarily to military hardware and the second to launch vehicle hardware, Hunley offers a sweeping overview of these impressive engineering innovations as well as insights into the dynamic personalities responsible for them. Together, the two volumes offer a unique, invaluable history of rocketry that should appeal to a wide range of scholars and space buffs.

J. D. Hunley was chief historian of NASA Dryden Flight Research Center before his retirement in 2001.

" A substantial history that will appeal to a wide readership."
--SciTech Book News

"Presents the many painful, exciting steps that made this technological marvel a practical mode of transport. The reader will find that rocket theory is fine, but it's through the engineering that people have really shown the height to which they can arise. Through the book's continuous listing of trials, errors, fixes, and more trials, the reader will come to appreciate the incredible effort that people expanded to acquire the skill and particular knowledge with which to efficiently and reliably launch a great mass into space. Yet, as it shows and as we've all seen, rocket technology still can keep us guessing."
--Outskirts Press

"Together with its preceding volume on Goddard Rockets to Muniteman III, shows that, with the right resources, humans can accomplish near magical travel away from earth."
--Universetoday.com