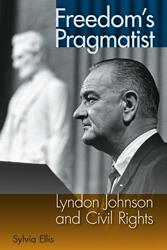 "Ellis paints a portrait of a politician who, like many other politicians, often publicly sailed with the prevailing political winds of the day but who, in private, constantly exhibited a fundamental commitment to fairness and justice. Freedom’s Pragmatist is a provocative and indispensable volume for students, teachers, researchers, and the general public alike in rethinking Johnson’s lifelong relationship with the struggle for African American freedom and equality."--John A. Kirk, editor of Martin Luther King Jr. and the Civil Rights Movement

"This comprehensive and balanced study of Lyndon Johnson and civil rights is a major contribution to the field of recent U.S. history. Ellis argues convincingly that Johnson’s moral vision and practical political skills were absolutely crucial to the passage of major legislation advancing the legal rights of African Americans. A splendid analysis."--Anthony Edmunds, Ball State University


Lyndon B. Johnson made several major contributions to the black freedom struggle during his time in the White House. He provided much-needed moral leadership on racial equality; secured the passage of landmark civil rights acts that ended legal segregation and ensured voting rights for blacks; pushed for affirmative action; introduced antipoverty, education, and health programs that benefited all; and made important and symbolic appointments of African Americans to key political positions.

This examination of Johnson’s life from childhood through his lengthy career in politics argues that place, historical context, and personal ambition are the keys to understanding his stance on civil rights. Johnson’s viewpoint, in turn, is essential to understanding the history of civil rights in the United States.

Sylvia Ellis, professor in American history at the University of Northumbria in Newcastle upon Tyne, England, is the author of Britain, America, and the Vietnam War and Historical Dictionary of Anglo-American Relations.

The book will be useful to those who know a bit about the civil rights movement and would like to have a short treatment of LBJ’s role in it.
--The Journal of American History

The first book-length examination of how Johnson approached racial matters throughout his life.
--The Journal of Southern History

By exploring the career of Lyndon Johnson, Ellis effectively portrays him as an essential member of the movement, one who provided the governmental power necessary for the push towards civil rights.
--Florida Historical Quarterly

Ellis skillfully portrays a man whose heart sided with the underdog, but whose politically astute head was slow to acknowledge and act on those feelings.
--North Carolina Historical Review