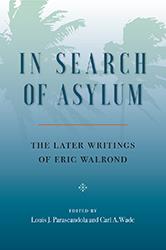 In Search of Asylum: The Later Writings of Eric Walrond

Eric Walrond is one of the great underexamined figures of the Harlem Renaissance and the Caribbean diaspora. Compiling Walrond’s European journalism and later fiction, as well as the pieces he wrote during the 1950s at Roundway Hospital in Wiltshire, England, where he was a voluntary patient, this collection at last fills in the biographical gaps in Walrond’s life. It provides insights into the contours of his later work and the cultural climates in which he functioned between 1928 and his death in 1966.