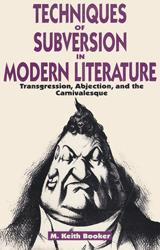 Techniques of Subversion in Modern Literature:
Transgression, Abjection, and the Carnivalesque

"A broad perspective on an important author and his works."--Marvin Lewis, University of Missouri

"A meritorious contribution to our knowledge of contemporary Latin American literature and culture."--Jonathan Tittler, Cornell University

Mario Vargas Llosa is one of the world's most respected and widely read living writers. His work is marked by technical sophistication and by its alliance with a variety of trends in modern culture. To date little criticism of his work has made use of the important developments in literary theory in the past two decades. This book does that, analyzing Vargas Llosa's place in modern and postmodern criticism.
Booker begins with an analysis of The Green House within the context of modernism, using this early work to develop several hypotheses concerning the differences between modernism and postmodernism in literature. He tests these hypotheses in the remainder of the book through detailed readings of Vargas Llosa's later novels (from Captain Pantoja and the Special Service onward) and within the context of theoretical discussions of postmodernism by such critics as Fredric Jameson, Terry Eagleton, Linda Hutcheon, and Andreas Huyssen. Booker's specific readings of Vargas Llosa's work are also informed by the insights of a number of critics, including Mikhail Bakhtin, Michel Foucault, and Theodor Adorno.
The readings focus on the formal characteristics of Vargas Llosa's writing and on the intense political engagement--characterized in later works by skepticism toward the claims of various political programs--that marks his career. As a result, this study yields insights into both the aesthetics and the politics of postmodernism, and it should be useful to those interested in Latin American literature and in the social and cultural landscapes of Vargas Llosa's works.
The book ends with a lucid description of published theories of modernism and postmodernism.

M. Keith Booker is associate professor of English at the University of Arkansas and the author of Literature and Domination: Sex, Knowledge, and Power in Modern Fiction (UPF, 1993), Techniques of Subversion in Modern Literature: Transgression, Abjection, and the Carnivalesque (UPF, 1991) and a number of essays on literature and literary theory. He began his career in science and engineering and worked for fourteen years at the Oak Ridge National Laboratory.

Vargas Llosa Among the Postmodernists
Literature and Domination: Sex, Knowledge, and Power in Modern Fiction