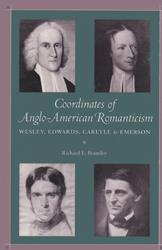 "A highly useful contribution to the effort to recognize complex connections between seemingly diverse and even contrary modes of 18th- and 19th-century thought. Vigorously, with much supporting evidence, Brantley takes us into intellectual territory that is relatively unexplored."--L. J. Swingle, University of Kentucky
"A work of exceptional intelligence and often brilliant insight. Richard Brantley deploys his triangular knowledge of English and American literature, philosophy, and theology to provide a refreshingly different view of the terrain."--Leonard I. Sweet, president, United Theological Seminary
Constructing a transatlantic arc of literature, Brantley explores how John Wesley and Jonathan Edwards provide an empirical as well as evangelical framework for interpreting their spiritual descendants, Thomas Carlyle and Ralph Waldo Emerson. He finds that the four Anglo-American writers share a simultaneously rational and sensational reliance on experience as the avenue to knowledge.
Wesley (1703-91), founder of British Methodism, and Edwards (1703-58), leader of the American Great Awakening, speak literally to experience in general, including empirical observation, scientific method, and apprehension of God-in-nature and the Spirit. Their shared methodology, harking back to the epistemology of John Locke, aligns nature with grace and heralds the "empirical-evangelical" vision shared by Carlyle (1795-1881), the Sage of Chelsea, and Emerson (1803-82), the Sage of Concord. All four balance religious myths and morality with scientific reverence for fact and detail.
Brantley's earlier prize-winning work, Locke, Wesley, and the Method of English Romanticism, explored the influence of Wesley's philosophical theology on British Romanticism. While reaffirming the optimism of Romantic literature, Brantley here offers another, broader case study in the sociology of ideas. He demonstrates that the creative tension between empiricism and evangelicalism--the sparks that fly from coordinates on the arc--illuminates a noble, yet neglected, Anglo-American sensibility.
Richard Brantley, professor of English at the University of Florida, is the author of Wordsworth's "Natural Methodism" and Locke, Wesley, and the Method of English Romanticism (UPF, 1984), which won the Conference on Christianity and Literature award for Best Book of 1984.

Anglo-American Antiphony: The Late Romanticism of Tennyson and Emerson

The Book of Yeats's Poems