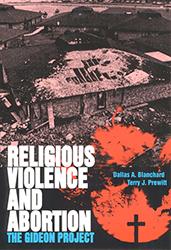 "Reads almost like a well-written novel. . . . The story it tells is unsettling, but important. Anyone interested in finding an acceptable solution to the vexed issue of abortion should read it."--Harvey Cox, The Divinity School, Harvard University
On Christmas Day in 1984 three Pensacola abortion clinics were bombed by four young people who later went to trial and were convicted and sentenced. The authors explore this moral drama as a case study of religiously motivated political action (the perpetrators identified with Gideon, the Old Testament slayer of those who sacrificed firstborn infants to Baal). Their analysis sheds light on the violent wing of the anti-abortion movement.
Their detailed account of the nationally publicized trial and the fundamentalist Christian community's response to the bombings will be important and compelling reading for those concerned with the abortion controversy and other issues that encompass social violence and contemporary religion.
Scholars will be interested in the work as a comprehensive sociological analysis of religious fundamentalism, an ideology that the authors tie to a medieval world view. Placing anti-abortion violence in the context of social movement theory, they conclude that persons who are predisposed toward such behavior are likely to be working-class males under age 35, socially isolated from countervailing attitudes. Religious fundamentalists, they warn, will continue to utilize violence in reaction to such subjects as pornography, homosexuality, sex education, equality for females, and prayer in public schools.
For this book the authors conducted interviews with local activists on both sides of the abortion issue. They interviewed local religious fundamentalists, personnel of clinics throughout the United States that have been subjected to arson or bombing, and, when possible, persons who have been tried and convicted of those offenses. In addition, they attended the Pensacola trial and fundamentalist church services.
Dallas A. Blanchard is associate professor of sociology at the University of West Florida and a United Methodist minister. Terry J. Prewitt is associate professor of anthropology at the University of West Florida.

"May be one of the most important case studies in the abortion stalemate."
--Choice