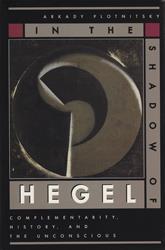 In the Shadow of Hegel:
Complementarity, History, and the Unconscious

In the Shadow of Hegel develops a new understanding of history operating against, but in the shadow of, the Hegelian logic of history as the unfolding of the Absolutely Self-Conscious Spirit--Geist. In this context Plotnitsky examines Hegel's significance for Marx, Nietzsche, Freud, Bataille, and, especially, Derrida, and exposes both the proximities and distances of the Hegelian and poststructuralist understanding of history.
The book offers a general theoretical framework enabling the understanding of history it develops but with broader implications. This framework is introduced in the wake of poststructuralist thinking, following Nietzsche, under the rubric of complementarity--a conceptual matrix drawn from Niels Bohr's interpretation of quantum mechanics, conjoined here with the matrix of general economy as developed, via Marx, Nietzsche, and Freud, in the works of Bataille and Derrida.
Within this framework Plotnitsky relates history and the unconscious--Hegel and Freud--transforming both concepts. He shows how history itself is complementary, specifically to the unconscious, which he sees as a central concept of post-Hegelian thought.
Plotnitsky also explores the role of quantum mechanics and several other developments in modern mathematics and science, particularly those proceeding along the axis of general economy. He reveals reciprocity and interpenetrations between these fields--from Newton to Riemann to Einstein and Bohr, on the one hand, and from Hegel to Nietzsche to Bataille to Lacan to Deleuze and Derrida, on the other--and by extensions new possibilities of conceptual and metaphorical traffic between different fields of intellectual inquiry.
Arkady Plotnitsky holds an M.Sc. in mathematics from the University of St. Petersburg, Russia, and a Ph.D. in comparative literature from the University of Pennsylvania, where he teaches English and comparative literature. He is the author of Reconfigurations: Critical Theory and General Economy (UPF, 1993).