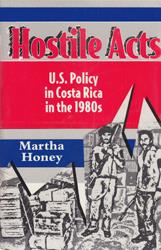 To Martha Honey, "hostile acts" is shorthand for the nature of U.S. policies in Costa Rica during the last decade. In this book she combines extensive academic research with her firsthand experiences as a journalist covering major portions of the Iran-contra scandal to weave together the story of how the Reagan and Bush administrations undermined Central America's model democracy.
Until 1980 Washington paid little attention while Costa Rica quietly developed a benign, quasi-socialist form of government that combined respect for human rights with the goal of achieving economic equality. Then, Honey writes, the new Reagan administration decided that Costa Rica would be important in the war against the Sandinistas in Nicaragua. Over the next few years, the United States poured huge quantities of economic aid into the country and also covertly trained and equipped contra rebel forces to wage war against the Sandinistas from bases in northern Costa Rica.
Honey explores the interaction between politics and economic aid during the Reagan/Bush years, describing illegal military activities, payoffs to Costa Rican officials, misappropriation of funds, and President Oscar Arias's pursuit of his Central American Peace Plan in 1986. She recounts her life at the time with her husband, cameraman and journalist Tony Avirgan, writing that "it never occurred to us that by pursuing a journalistic investigation we would end up being accused of drug trafficking, of murder, of bribing witnesses, of espionage; that we would be twice sued for libel; that our media clients would be pressured to stop hiring us and our colleagues would be told we were Communist agents."
Honey's account ends in 1989, the year the Costa Rican government charged CIA operative John Hull with committing "hostile acts" for his involvement in contra operations.

Martha Honey is a Washington-based freelance journalist. From 1983 to 1991 she worked as a freelance journalist in Costa Rica. Her clients included the Times (London), The Nation, the New York Times, ABC television, National Public Radio (NPR), the British Broadcasting Corporation (BBC), and Canadian Broadcasting Corporation (CBC) radio. She is the coauthor with Tony Avirgan of La Penca: On Trial in Costa Rica, The CIA vs. The Press, and War in Uganda: The Legacy of Idi Amin. She has been the recipient of many honors, including Costa Rica's highest journalism prize, the Pio Viquez National Award for Journalism, presented by President Oscar Arias in 1989, and the Canadian Centre for Investigative Journalism award for best radio documentary in 1987.