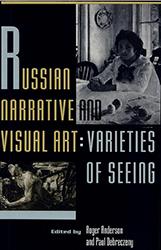 This collection explores the interaction between visual and verbal artists in Russia in the nineteenth and twentieth centuries. It highlights instances of semiotic interplay between the two artistic media, revealing basic assumptions that Russian culture has maintained about the world and about itself. The book will appeal to scholars of Russian history, literature, and art, as well as to a broad readership interested in questions of cultural semiotics and the theory of art.


Contents
Introduction, by Roger Anderson and Paul Debreczeny
The Romantic Landscape in Early Nineteenth-Century Russian Art and Literature, by James West
The Country House as Setting and Symbol in Nineteenth-Century Literature and Art, by Priscilla Reynolds Roosevelt
"Montage" in Gogol's Dead Souls: The View from the Bachelor's Carriage, by Gary Cox
The Optics of Narration: Visual Composition in Crime and Punishment, by Roger Anderson
Chekhov's Use of Impressionism in "The House with the Mansard," by Paul Debreczeny
The Composed Vision of Valentin Serov, by Alison Hilton
A Modernist Poetics of Grief in Wartime Works of Tsvetaeva, Filonov, and Kollwitz, by Antonina Filonov Gove
Ironic "Vision" as an Aesthetics of Displaced Truth in M. Bulgakov's Master and Margarita, by Juliette R. Stapanian-Apkarian

Roger Anderson is professor and chair of the Department of Russian and Eastern European Studies at the University of Kentucky. He is the author of Dostoevsky: Myths of Duality (UPF, 1986) and editor of Soviet-American Relations: Understanding Conflict and Its Management. Paul Debreczeny is Alumni Distinguished Professor of Russian literature at the University of North Carolina at Chapel Hill. Among his books are Nikolai Gogol and His Contemporary Critics, The Other Pushkin: A Study of Alexander Pushkin's Prose Fiction, and Literature and National Identity: Nineteenth-Century Russian Critical Essays, which he edited and translated.

"The U.S. ambassador to Khartoum from 1986 to 1989, Anderson concentrates on Sudanese politics during the regime of Sadiq al-Mahdi. . . . The author's opportunities to observe and interact with Sadiq were extensive and give the book a valuable insider's perspective."-- Foreign Affairs
--Foreign Affairs