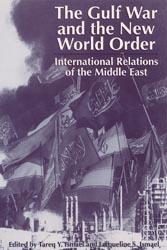 "Groundbreaking. . . . Offers the perspectives of well-known scholars on a constellation of events that are reshaping the nature of international affairs."--Walid Kazziha, American University in Cairo

"A significant contribution to the field of international relations in general and to the area of foreign policy in particular. . . . Useful for undergraduate courses on the Middle East, as well as graduate studies."--Richard H. Pfaff, professor emeritus, University of Colorado

The Ismaels, a seasoned team of scholars, bring together here renowned experts in international affairs who explore the nature and implications of the Gulf War, particularly as it affects the fashioning of a New World Order.

Part I: The Gulf War and the International Order
Reflections on the Gulf War Experience: Force and War in the UN System, by Richard A. Falk
The United Nations in the Gulf War, by Robert Springborg
Bush's New World Order: A Structural Analysis of Instability and Conflict in the Gulf, by Yasumasa Kuroda
The European Community's Middle Eastern Policy: The New Order of Europe and the Gulf Crisis, by Friedemann Buettner and Martin Landgraf
Regional Cooperation and Security in the Middle East: The Role of the European Community, by Timothy Niblock
Japan: An Economic Superpower in Search of Its Proper Political Role in the Post-Cold War Era, by Yasumasa Kuroda

Part IV: Political Trends and Cultural Patterns
The Middle East in the New World Order: Political Trends, by Louis J. Cantori
Islam, Democracy, and the Arab Future: Contested Islam in the Gulf Crisis, by Raymond W. Baker
Islam at War and Communism in Retreat: What Is the Connection? by Ali A. Mazrui
Global Apartheid? Race and Religion in the New World Order, by Ali A. Mazrui
Democracy Died at the Gulf, by Richard A. Falk