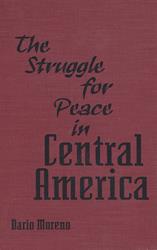 The Struggle for Peace in Central America

"[Moreno] guides the reader through the complex and uneven processes by which the five Central American nations arrived at a commonly acceptable, but not uncontested, peace agreement. . . . A considerable achievement, and its value is enhanced by a balanced tone that is rare."--Frederick S. Weaver, Hampshire College, Amherst

For two decades U.S. politicians obsessed about the Central American crisis. Its exit from the top of their global agenda is testimony to the success of the Central American Peace Plan designed by Costa Rican President Oscar Arias Sanchez and signed by the other Central American presidents on August 7, 1987.
This book captures the complicated web of domestic and international actors involved in the political crisis and of the various attempts to negotiate acceptable terms of peace.
Moreno, who conducted personal interviews with many of the key players in the conflict, argues that the five Central American nations share a common history based on their mutual desire for unification, on the pervasiveness of U.S. influence throughout the region, and on their dependence on a limited number of agricultural exports. The peace plan takes advantage of their interdependence and rests on two pillars: that all Central American states accept the legitimacy of each existing government and that each regime commit itself to progressive democratization of the region. Moreno maintains that the plan succeeded because it recognizes the fundamental link between domestic and foreign politics in Central America.
Describing the 1990 defeat of the Sandinistas in elections in Nicaragua and the disarming of the contras, Moreno continues his analysis to the end of the decade as the nations of Central America attempted to comply with the agreement.

Dario Moreno is associate professor of political science at Florida International University. He is the author of U.S. Policy in Central America: The Endless Debate (UPF 1990) and was a Fulbright scholar in Costa Rica in the fall of 1990.