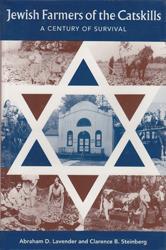 Jewish Farmers of the Catskills
A Century of Survival

"A portrait of Jewish farming in the Catskills that is both elegant and insightful."--Abraham Peck, administrative director, American Jewish Archives


For almost a century, the largest concentration of Jewish farmers outside of Russia or Israel survived as a community in upstate New York, prospering on land that others in the area essentially had abandoned.
Using archival records that date to the nineteenth century and extensive interviews with the farm families and others, Abe Lavender and Clarence Steinberg tell the story of immigrants from Eastern Europe and New York's Lower East Side who came together in the Catskill Mountains with dreams, ambitions, and fortitude to forge a common culture.
To secure their poultry, dairy, and vegetable farms, they established cooperative organizations to market milk, mill feed, and provide fire insurance. They introduced new production methods, and some developed the legendary large summer resorts such as Grossinger's and the Nevele. They overcame anti-Semitism and the economic hardship of the Great Depression, and some were principals in a revolution in agricultural marketing and technology. And, just about the time the Woodstock cultural revolution took place on Max Yasgur's dairy farm, they succumbed to changing times.
Illustrated with 80 rare photographs, some dating to the 1920s, Jewish Farmers of the Catskills preserves their singular history.


Abraham D. Lavender is associate professor of sociology and anthropology at Florida International University. He is the author of French Huguenots: From Mediterranean Catholics to White Anglo-Saxon Protestants, which received the 1990 National Book Award of the National Huguenot Society; Ethnic Women and Feminist Values: Toward a New Value System; and A Coat of Many Colors: Jewish Subcommunities in the United States.
Clarence B. Steinberg, formerly at the University of Maryland, is a Public Affairs Specialist with the Department of Agriculture in Washington. He was raised on his parents' farm in the Catskills and has personal knowledge of much of the history described in Jewish Farmers of the Catskills.

"This is truly an original study of a little-known subject."
--Jewish Spectator

...should be an addition to any library that has holdings in American Judaica...
--Jewish Folklore and Ethnology Review

"Lavender and Steinberg have admirably succeeded in crafting a truly scholarly book rich in pertinent detail and highly readable. Human touches abound, furthered by some eighty photographs intersersed throughout. An exhaustive bibliography, helpful notes, and an index are included."
--Agricultural History