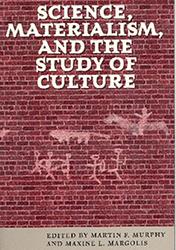 Science, Materialism, and the Study of Culture

"Well-argued, clearly written essays by anthropologists committed to understanding culture through theoretically grounded analysis of its material underpinnings. The authors' impassioned call for an anthropology that addresses pressing social problems--exploitation, inequality, violence, hunger, and underdevelopment--is a welcome counterweight to studies that view power primarily as discourse or poetics."--Marc Edelman, Hunter College and the Graduate Center, CUNY

"A major contribution to anthropology in both theory and application."--Barbara Miller, George Washington University

The social sciences, especially cultural anthropology, are mired in contentious arguments about the desirability--even the applicability--of scientific and causal principles in the study of culture and society. The authors of these essays come down clearly on the side of the significance of these principles, claiming that a cultural materialist approach is the most productive way of explaining cultural differences and similarities and of understanding many "unexplainable" aspects of culture.
The authors analyze both theoretical and practical issues, and they critique currents in social science that claim that human behaviors and organizations are undecipherable. They also demonstrate an important but often overlooked contribution of cultural materialism--its firm commitment to understanding the injustices and inequities in societies around the world.


Martin F. Murphy is associate professor and chair of anthropology at the University of Notre Dame. He is the author or coauthor of four books, including Dominican Sugar Plantations: Production and Foreign Labor Integration and The 1982 Elections in the Dominican Republic: A Sociological and Historical Interpretation.

Maxine L. Margolis is professor of anthropology at the University of Florida. She is the author of Little Brazil: An Ethnography of Brazilian Immigrants in New York City, Mothers and Such: Views of American Women and Why They Changed, and The Moving Frontier: Social and Economic Change in a Southern Brazilian Community; and coeditor of Brazil: Anthropological Perspectives.