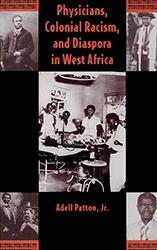 "An important [book] on a crucial topic. . . . As educative as it is healing. . . . does justice to the hundreds of African and diaspora physicians who bore the white man's burden."--A. G. Adebayo, Kennesaw State College
"A carefully researched study which illuminates crucial topics in the history of colonial Africa, the African diaspora, and the history of medicine, this important book will interest scholars from many fields."--K. David Patterson, University of North Carolina, Charlotte
This history of West African medicine, seen through the biographies of African practitioners, documents the struggles of the medical profession in Africa to achieve autonomy and self-definition.
The practice of African medicine is ancient--the source, in fact, of a great deal of Western medical knowledge from the Middle Ages onward. Until the close of the 19th century, African and West Indian physicians were able to work freely to protect the health of Africans and Europeans alike in West Africa.
In 1901, however, when colonialism--and pseudoscientific racism--was in full force, British administrative action brought about an era of restrictions and segregation, a time of "closed shop," as British middle-class policy makers described it in the 1950s. Even African physicians trained in the United States and the former Soviet Union and Eastern bloc countries were unwelcome in their countries of origin upon their return home.
This book discusses the role of African doctors in colonial state and society, the emergence of Africa's modern medical service, and the contribution of African physicians to an understanding of African diseases and their treatment. It also deals with traditional African medicine, beginning in Egypt 3,000 years ago. Historians and social scientists specializing in West African history, and African historians in general--especially those interested in medicine--will find the book essential.
Adell Patton, Jr., is associate professor of history at the University of Missouri, St. Louis. An Africanist born in Arkansas, he is the author of book chapters and of articles in the International Journal of African Historical Studies, the Journal of Negro History, Arkansas Historical Quarterly, and other journals.

"no person could read this very factual book without coming away with a sense of outrage regarding colonial racism and a deep respect for the physicians who despite this, struggled and found a way to serve."
--Choice

"this is a pioneering study offering much by way of stimulus for further research."
--Journal of the History of Medicine

"an important contribution to the debate on African professionalization"
--African History