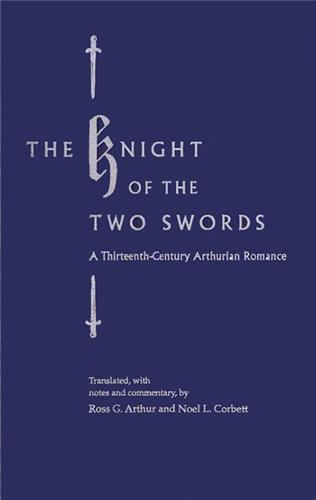 The Knight of the Two Swords
A Thirteenth-Century Arthurian Romance

"The portrayal of women in this romance is particularly intriguing and should provoke animated discussions of medieval women's roles. . . . The existence of this translation should incite scholars to investigate the romance more thoroughly."--Wendy Pfeffer, University of Louisville
"Arthur and Corbett are the first to look seriously at this poem for almost a century. Because of their translation, it will be studied by scholars and taught in the classroom. . . . The translation . . . is a gem. Elegant, lively, witty, eminently readable, it captures perfectly the spirit of the original."--William Calin, University of Florida
The first translation into English of this 13th-century French epic poem of adventure and romance in King Arthur's court should have appeal far beyond its core reference market. It adds another--French--dimension to the Arthurian legend, and it introduces a "lost" text to a late-20th-century audience of scholars and lay readers. Some specialists in Old French may be aware of the existence of the poem but unfamiliar with its contents. The mere existence of a translation will be sufficient to provoke a spate of articles and critical studies.
Li Chevaliers as deus Espees is an excellent example of the quintessential medieval European genre, the "adventure romance." It makes creative use of the set of motifs and themes common to the genre, and extends their range in a way that provokes readers to consider a variety of questions concerning the nature of medieval knighthood, the duties and privileges of knights and their lords, and the roles open to women in a feudal society.
As an imaginative poem filled with scenes of medieval life, as a lively exponent of the Arthurian genre, or as reflection of the aristocratic mentality of the landed class in 13th-century France, The Knight of the Two Swords simply deserves to be better known; a reading of it will amply repay the curious student, the literary scholar, and the lover of medieval culture. In addition to its expected audience of scholars and teachers of Old French literature, this book will appeal to general readers fascinated by everything medieval or Arthurian.
Ross G. Arthur is professor of humanities at York University in Ontario. He is the author of Medieval Sign Theory and Sir Gawain and the Green Knight and the translator of Three Arthurian Romances from Medieval France: Caradoc, The Knight with the Sword, The Perilous Graveyard, Amadas and Ydoine, and Jaufre: A Provençal Arthurian Romance. Noel L. Corbett is associate professor of French at York University in Ontario, Canada. He is the editor of Vie de Saint Louis and the author of Langue et identité.

"will give deserved prominence to a work of exceptional interest." "The fluency of their translation, and especially their lively rendering of dialogue, add to the accessibility of this version of the romance, and will ensure that much more will be heard on the text in the future."
--Notes & Queries