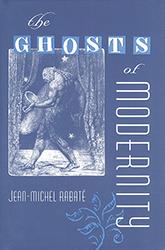 The Ghosts of Modernity

"Rabaté's strength is that he does not treat modernism as a monolith. The study's originality is in its close examination of several 'key' themes in several 'key' texts, almost all of which he reads autobiographically. . . . It is the pattern of these themes as well as the psychoanalytic method that holds these essays together. The result is a fresh look not at modernism as a whole, but at some central themes and images of the modernists."--S. E. Gontarski, Crosscurrents Series Editor
Jean-Michel Rabaté, the eminent French Joycean, combines psychoanalytical and philosophical concepts in rereading the history of modernity to give a more precise meaning to the term "modernism."
Rabaté focuses throughout on a single theme, the ghostly nature of modernity. In writing a history of the concept of modernity with the awareness that the radically new has often been subject to the effects of the return of the repressed, Rabaté analyzes the notion of loss in various fields: in Freudian aesthetics of color, in literary history, and in philosophy. The postmodernist fascination with a lost object allows a reconsideration of the boundaries of such terms as "modernism" and "postmodernism."
The conclusion ties together all these motifs, from Joyce to Barthes, together and shows their theoretical basis in Marx's criticism of ideology and in Freud's consideration of mourning. From the analysis of "color" as an unthinkable object of discourse to an aesthetics of the unpresentable, Rabaté points to the possibility of an "ethics of mourning," which would seem capable of overcoming the dead end of history whose ending condemns it to eternal repetition.
This work will appeal to a wide community of scholars. Its strong French and continental emphasis has application in literary studies, particularly English, French, and comparative studies.
Jean-Michel Rabaté is Marjorie G. Ernest Term Professor of English at the University of Pennsylvania. He is the coeditor of L'Ethique du don: Jacques Derrida et la question du don and the author of numerous books, including James Joyce, Joyce upon the Void: The Genesis of Doubt, Thomas Bernhard, and La Beauté amère.

"This challenging and insightful study, well-supported and documented with nearly 20 pages of detailed notes, will be welcome and useful to a variety of graduate-level scholars and researchers, especially those in the area of comparative studies."
--Choice

""Ghosts of Modernity is one of the most learned and subtle studies of modernist texts I have read, as well as one of the most gracefully written. The author's own ghosts, from Dante to Derrida, have rarely made so valuable an appearance in what is, modestly presented as a work of practical criticism."-- Marjorie Perloff, Stanford University
--L'Esprit Createur