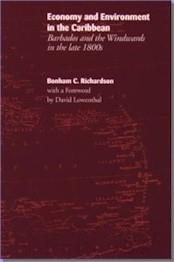 "Bearing in mind the recent renewed interest in the economic and environmental problems of small islands everywhere, [this] is a highly appropriate time to bring back to world attention the issues of that time, which served in large measure to define the patterns of development in Barbados, Grenada, St. Lucia, and St. Vincent in the early decades of the twentieth century. . . . [A book] especially to be welcomed."--David Watts, University of Hull, England

In this historical geography of the British colonies of Barbados and the Windwards (St. Lucia, St. Vincent, and Grenada), Bonham C. Richardson describes the economies, environments, and societies of the four geographically dissimilar islands and outlines the severe economic depression they experienced following the 1884 plunge in London sugar prices and the exacerbating effects of two catastrophes, a massive hurricane in 1898 and a volcanic eruption in 1902.
In response to these problems, the British parliament created the 1897 West India Royal Commission to outline a new policy for the islands’ development. Concentrating on the years between 1880 and 1905, Richardson makes use of unpublished archival records, local newspapers, and records of the Royal Commission to explain the enormous changes in land-use patterns in the British Caribbean.
In a novel approach, Richardson emphasizes the effects of the islands’ physical environments and devotes chapters to climate, waters, lowlands, and highlands. He also demonstrates how these environmental zones and resources were contested by different socioeconomic groups, leading him to one of his most provocative arguments: that depression-induced demonstrations and riots in the islands in the late 1890s in large part precipitated the Royal Commission’s wise decision to advocate the break-up of sugarcane plantations into smaller shareholds. Thus, Richardson demonstrates the ways in which working people, far from being victims of colonialism, managed to influence British decision makers such that each island developed a unique adaptation to the economic and geophysical stresses placed on it, proving fruitless the British attempts to "regionalize" the islands under a single policy.
Throughout, Richardson’s discussion of insularity and islandness is important to understanding problems in the Caribbean today, a century later, and will be of interest to geographers and historians of the Caribbean and to anyone with an interest in small-island economics.

Bonham C. Richardson is professor of geography at Virginia Polytechnic Institute and State University. His most recent book, The Caribbean in the Wider World, 1492-1992, received the Gordon K. Lewis Award in 1993 from the Caribbean Studies Association.

"Richardson illuminates a dim chapter of West Indian history using oral testimonies, strategic comparisons, and well-crafted narrative all to good effect. There is in addition a rich theoretical perspective that deserves study quite apart from the story of the islands and their problems. One can learn a great deal from this book about how to write ecological history." -- American Historical Review
--American Historical Review

"Bonham Richardson has woven a tale of historical change and transformation and contributed to the considerable wealth of historiography the region's scholars have built. This book belongs on the shelf of Caribbean scholars, and I am sure it will be a valuable source of reference for the regional community."-- Economic Geography
--Economic Geography