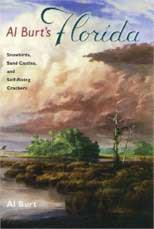 "Some say that Floridians lack a sense of place—they won’t after reading Al Burt."—Ann Henderson, executive director, Florida Humanities Council
[SIDEBAR]
"Florida starts in the subtropics and slowly rises into the true temperate zone, the geography and all living things taking on different looks as the elevation goes from sea level to hilly, from the central ridge to the beaches, the terrain from desert-like to swampy, the soil from sugar sands and rich muck to red clay. The blossoms change from orchids and frangipani to azaleas and dogwoods, the people from international sophistication to Cracker commonality, the accents from the bobtailed syllables of New York and distinctive fastbreaking Spanish of the Cubans to the mysteries of Haitian Creole and Southern mushmouth (like mine). . . . One winter season, the story goes, an amused snowbird encountered an old Cracker in crowded South Florida. ‘Lots of weird people down here,’ the snowbird said, patronizingly. ‘Yeah,’ the Cracker replied, looking him over carefully. ‘But they ain't near so many in August as they is this time of year.’"

As a roving reporter for the Miami Herald from 1973 to 1995, Al Burt traveled all of Florida, studying it with the insight of a native and the detached eye of the foreign correspondent he had been. During those years, he observed connections with the state’s past and speculated about its future, and, while he was at it, took note of the human frailties and heroisms he witnessed every day. Al Burt's Florida is like a family portrait, a loving but not uncritical view of a complex and fascinating state.
Burt's portrait combines vignettes of notable Floridians--some famous, like Ed Ball, but most better known locally--with those of the state’s many special places: Okeechobee in the teens and twenties, Miami Beach in the fifties (when dinner in Havana was only a $26 plane ride away), Wakulla Springs when it served as Johnny Weismuller’s Tarzan movie set, modern-day Tallahassee with its formality and grace.
Al Burt himself emerges from this landscape as the remarkable, engaging, and passionate Floridian he is. He takes us in hand, starting from his headquarters in the north Florida scrub, on a tour of the charm, substance, and fantasy that are Florida, yesterday and today. And always, he dwells with greatest affection on the smaller places, the real places, the anchors of old Florida--and on those folks who do their best to preserve them. In the process he captures what few have expressed--a sense of Florida as home.

Al Burt worked as a journalist for 45 years, the last 22 of which he spent as a roving Florida columnist for the Miami Herald. The recipient of numerous journalism awards, he has been a freelance contributor to many magazines, including The Nation and Historic Preservation, and is the author of several books, among them Florida: A Place in the Sun (1974) and Becalmed in the Mullet Latitudes (1984). In his honor, the 1,000 Friends of Florida established the annual Al Burt Award for Florida journalism.

"Reading Burt is like taking a gentle, overland voyage aboard an air-steamboat drifting across Florida cloudlike, in space and time, with a captain you can rely on to show you all the best places and never hit a sandbar or a mudflat. You can have fried mullet for breakfast and cornbread and coffee any time you want." "Few people have traveled the state more, of know it more intimately, than Al Burt. For 23 years he wore out tire treads and shoe leather visiting all corners of the place, untrodden and too-trodden, capturing its characters like a butterfly collector and pinning them painlessly to newspaper pages." "Here, in just over 180 pages, in anecdotal, pointillistic style, are the sights and impressions of those journeys, recounted in a leisurely cadence, like the rocking of a front porch swing on a warm afternoon." "Over and over again one is struck with how Burt managed to catch the last train, so to speak: to talk to the old people who remembered Florida as it was in the 19th and early 20th centuries, to capture their memories before the living minds flickered out forever, and to keep them alight in print."
--Miami Herald

"From the newest resident to cross the state line to those who produly claims the title Florida Cracker, this book should be required reading."
--Gainesville Sun

"Writer Al Burt has been called 'the Charles Kuralt of Florida,' "
--Tampa Tribune

"I won't even pretend to be objective. I have been a fan of Al Burt since my beginning days as a journalist more than a quarter century ago." "Al Burt's Florida serves as a personal memoir and informal history of Florida. It's filled with memories, good folks, and sharp observations about life in a state that hosts both Florida panthers and white-haired Snowbirds who fall asleep at traffic lights." "Al Burt is the he-coon of Florida journalists."
--St. Petersburg Times

"Only someone with an indifferent heart would come away unchanged after reading the latest collection of writings by veteran Florida commentator Al Burt." "If you're looking for colorful, evocative and sometimes humorous writing, this place should be on the map. Like a trip down an unfamiliar country road, you never know what may be around the next bend." "This book, his fourth, is part of University Press of Florida's recently launched Florida History and Culture Series, which is designed to encourage authors researching Florida history, environemnt and culture." "It is certainly an Impressive start." "Al Burt has few peers when it comes to contemporary Florida writing. This book is a joy to read and reread and should be on many bookshelves."
--Lakeland Ledger

"In a world where history books act as the sledgehammer breaking away chunks of surrounding rock to leave a crude image, Al Burt emerges as the fine sculpting tool, who carves out the countours of the face and the cuticles on the hands. This statue is Florida, and Burt brings out its striking nuances and subtle profiles in Al Burt's Florida: Snowbirds, Sandcastles and Self-Rising Crackers." "something every Florida Cracker, and those who wish they were Crackers, should read."--Florida Living
--Florida Living

"Al Burt's Florida affords readers a new dimension of understanding about this most southern state. One read is not nearly enough. It deserves more - much more. Every page is a vivid painting of realistic proportions." "A deeply commendable and lasting read."
--Hendry-Glades Sunday News

"This is the first in a new line of books called the Florida History and Culture series, and the university press could not have chosen a more worthy author to begin it." "Anyone who has explored Florida's not-so-famous places, or plans to do so, will enjoy this wonderful book."
--Stuart News

"Al Burt traveled all over Florida as a rroving reporter for the Miami Herald from 1973 ro 1995. He knows the state's secret wonders, its backwoods characters and its few undiscovered hamoets better than anyone, and he writes about them with grace, wit and charm."--Tampa Tribune
--Tampa Tribune

"Burt explores the most complicated state in the South with both an appreciative eye and a bitter fascination." "In essays drawn from his travels for the Herald, he searches for 'the fabled La Florida, exotic enough for the careless to call it paradise, beautiful enough for almost all to love, but too complex and changeable for easy understanding."
--Brightleaf - A Southern Review of Books

"Al Burt's new book is the next best thing to living the fascinating reality of the Land of Flowers." "His words are paintings."
--Farmer & Rancher

"A fascinating literary journey through Florida, yesterday and today, and should interest oldtimers and newcomers." "No other person has written about Florida and its people with more insight and sensitivity than has Al Burt." "This will be one of the most enjoyable books you have ever read and it will give you a true sense of place about Florida." -- Space Coast Press
--Space Coast Press

"Burt's prose is a pleasure to read. He strings together simple words to tell stories and paint word pictures that end up as superlative reading. He has an exquisite feel for the land, and he carries his reader from the limestone depths of the peninsula, up through the marl and the sand, into the land of gopher tortoises, rat snakes, and sand pines, and finally into an atmosphere spiked with bugs and stirred by hurricanes." -- Florida Historical Quarterly
--Florida Historical Quarterly

"The Crackers Burt tells of are men and women who lived in the late 1800s and live today along the Ocklawaha and in the floodplains of Lake Okeechobee. Cow hunters, Conchs and alligator men -- growers of oranges, sugarcane, and muscadine grapes -- and moonshine makers. They drove mules, ate fried mullet and told yarns in Cracker creole about Florida's panthers, snakes, alligators, and hurricanes."-- Winter Haven News Chief
--Winter Haven News Chief

The Tropic of Cracker