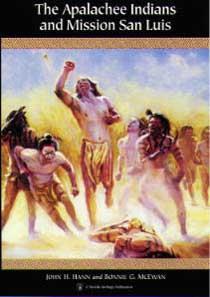 The Apalachee Indians of northwest Florida and their Spanish conquerors come alive in this story -- lavishly illustrated with 120 color reproductions -- story of their premier community, San Luis. With a cast of characters that includes friars, soldiers, civilians, a Spanish governor, and a diverse native population, the book portrays the dwellings, daily life, religious practices, social structures, and recreation activities at the mission.
From their prehistoric ancestors and first contact with Europeans in the 1500s to their dispersal following attacks by the English and by their Native American allies in the early 1700s, the Apalachee played important roles in the history of Florida and of native peoples throughout the Southeast. The San Luis community near Tallahassee, the most thoroughly investigated mission in Florida, served as Spain's provincial capital in America. From 1656 to its conquest by the English, it flourished as the only significant Spanish settlement in Florida outside of St. Augustine.
Written by the two foremost authorities on the Florida Apalachee, this full-color volume offers general readers a compelling combination of archaeology and history.


John H. Hann is a research historian at the San Luis Archaeological and Historic Site and a leading scholar on the missions of Spanish Florida. He is the author of Apalachee: The Land Between the Rivers (UPF, 1988), Missions to the Calusa (UPF, 1991), and History of the Timucua Indians and Missions (UPF, 1996).
Bonnie G. McEwan, director of archaeology at the San Luis site in Tallahassee, has conducted research in the Southeast, California, Spain, and the Caribbean. She is the editor of The Spanish Missions of La Florida (UPF, 1993).

"A handy primer abot pre-English north Florida." "For armchair historians, The Apalachee Indians and Mission San Luis is a good starting point for investigating how and why this seemingly powerful tribe disappeared into history." -- Florida Wildlife
--Florida Wildlife

"Lavishly illustrated . . . with an amazing story, 'The Apalachee Indians and Mission San Luis' . . . fills an important gap in our knowledge of native Indian tribes in Florida."
--Pike County Citizen - Alabama

"The new 'Native Peoples, Cultures, and Places of the Southeastern United States' series makes its debut with this volume, a lavishly illustrated, well-written overview of the Apalachee Indians that targets a broad audience. . . . The illustrations make this a truly beautiful book -- a bit extravagant at the cloth price, but a real bargain for the paper!" -- SMRC Newsletter (Southwestern Mission Research Center)
--SMRC-Newsletter (Southwestern Mission Research Center)

"Providing fine-grained information about the seventeenth-century province and its capital, this book is a product of the partnership which prevails in Florida between historical archaeologists and historians. . . . The volume is copiously illustrated. This feature, along with an easy-to-read layout, clear style, and a focus on real people, makes the book accessible to the younger reader. The more sophisticated reader will recognize the fruits of years of scholarly research on every page." -- Catholic Historical Review
--Catholic Historical Review

"The intent of this series is to acquaint the general reading population with information from archaeological and historical sources on American Indian groups in the Southeast and yet be accessible even to grammar school children. It has achieved this goal admirably. . . . This volume should be an indispensable part of the library of anyone interested in Florida's first Spanish period. It provides the lay or casual reader with a quick, easily understood, readable, and even entertaining snapshot of that era in Apalachee."-- Florida Historical Quarterly
--Florida Historical Quarterly

"The book is an excellent history of San Luis and the surrounding area. Certainly one of the book's important contributions is the large number of colored illustrations and maps. These show the location of the plaza, the important buildings which surrounded it, etc. There is a drawing or map on nearly every page. Not only does the book read well, it will also make an excellent coffee table exhibit."-- Louisiana History
--Louisiana History

"One in a slowly expanding number of books that exemplify the growing awareness on the part of scholars and the institutions that support them that they have a duty to share their knowledge with an audience beyond the limits of their professional or bureaucratic circles. With only rare and small lapses into archaeological jargon, it succeeds in doing just that. Buy it and read it."-- SMRC-Newsletter (Southwestern Mission Research Center)
--SMRC-Newsletter (Southwestern Mission Research Center)

"The Apalachee Indians is a rarity in more than its subject matter. Its text is so clear and concise that the book can be used and appreciated by anyone from a middle school student to a graduate faculty member. Furthermore, the work is one of the most profusely and beautifully illustrated ever to emerge from an academic press. There are an astounding 120 color maps, reconstructions, photographs, and cutaway views. Such illustrations are one reason that this book is unusually effective in making a 'lost' Indian nation real and concrete to readers."-- Journal of the Indian Wars
--Journal of the Indian Wars

"This book and the financial support that helped to produce it performs a valuable service by making Hispanic contributions to the history of north central Florida accessible to the general public in a region where they are imperceptible to all but the most informed individuals and frequently clouded by stereotypes and misinterpretations. Is enjoyable to read, partly because the authors avoid academic jargon. Excellent illustrations enhance the text on many pages, helping to bring the story to life. The book also contains many photographs of archaeological artifacts that add insight and a human touch to the authors' discussions of life in seventeenth-century Florida. Educators could use this book for courses on colonial Florida or the colonial South." -Public Historian
--Public Historian

"a concise history of the Apalachee in Western Florida from pre-contact to their encounters with the Spanish and the Catholic Mission system in the seventeenth and eighteenth centuries." - H Net
--H-Florida

Apalachee: The Land between the Rivers
A History of the Timucua Indians and Missions
Hernando de Soto Among the Apalachee: The Archaeology of the First Winter Encampment
An Early Florida Adventure Story: The Fray Andrés de San Miguel Account
Missions to the Calusa

The Spanish Missions of La Florida
Indians of the Greater Southeast: Historical Archaeology and Ethnohistory