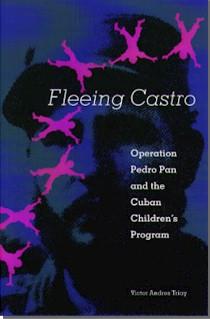 
"The first complete and comprehensive work on these important, unique programs. . . . An interesting, humane, yet tragic component of the post-1959 Cuban experience and the Cold War in general."--Antonio Benitez-Rojo, Amherst College

"The ordeal began [for the children] when their parents told them they had to travel alone and that they had to keep the upcoming trip a secret. The most powerful parts of the book are their accounts. . . . Through interviews with many of the participants—the children and their parents, the coordinators of the airlift, those in the underground in Cuba and the Catholic sponsors in the United States—Triay attempts to answer many of the questions the exodus raised."--Miami Herald

A stirring account of the covert effort to smuggle Cuban children into the United States in the aftermath of Fidel Castro's rise to power, Fleeing Castro brings to light the humanitarian program designed to care for the children once they arrived and the hardship and suffering endured by the families who took part in Operation Pedro Pan.

From late 1960 until the October 1962 missile crisis, 14,048 unaccompanied Cuban children left their homeland, the small island suddenly at the center of the Cold War struggle. Their parents, unable to obtain visas to leave Cuba, believed a short separation would be preferable to subjecting their offspring to Castro's totalitarian Marxist state. For the children, the exodus began a prolonged and tragic ordeal--some didn’t see their parents again for years; a few never did.

Until now, this chapter of the Cuban Revolution has been relatively obscure. Initially the result of an effort by James Baker, headmaster of an American school in Cuba who worked closely with the anti-Castro underground, Pedro Pan quickly came to involve the Catholic Church in Miami and, in particular, Father Bryan Walsh, who established the Cuban Children's Program, the nationwide organization that cared for those children without relatives or friends in the United States--almost half of them. The latter program, in effect until 1981, was the first to allot federal money to private agencies for child care, an action with far-reaching repercussions for U.S. social policy.

Victor Andres Triay traces this story from its political and social origins in Cuba, setting it in the context of the Cold War and describing the roles of the organizations involved in Cuba and in the United States. Making use of extensive interviews with Baker, Walsh, and influential underground figures, as well as personal letters that document the fears and dreams of both the parents and the children, Triay presents this history of Pedro Pan--the largest child refugee movement ever in the Western Hemisphere--with the drama of an international thriller and the pathos of a heartbreaking family drama.

Victor Andres Triay, whose parents left Cuba in 1960 for exile in the United States, is assistant professor of history at Middlesex Community College, Middletown, Connecticut. He grew up in Miami, Florida.

"For the children, the ordeal began when their parents told them they had to travel alone and that they had to keep the upcoming trip a secret. The most powerful parts of the book are their accounts." -- Miami Herald
--Miami Herald

"Describing the migration of more than 14,000 unaccompanied Cuban children to the US between 1960 and 1962, Triay recounts a chapter in the extension of the Cold War to the Americas. . . . Students of inter-American relations will especially welcome his treatment of private sector responses in the US to confronting Castro's Cuba during the 1960s." -- Choice
--Choice

The Mariel Boatlift: A Cuban-American Journey
Bay of Pigs: An Oral History of Brigade 2506