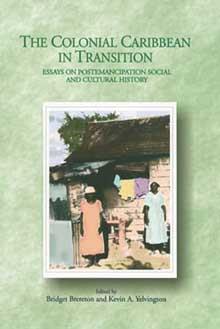 Edited by Bridget Brereton and Kevin A. Yelvington

"This stimulating collection of original essays honoring Donald Wood shows how pioneering his work was, and how much has been done in the thirty years since his Trinidad in Transition, on the social and cultural adjustments to emancipation."—O. Nigel Bolland, Colgate University

This examination of the social evolution of the colonial Caribbean, from the beginning of the formal end of slavery to the middle of the 20th century, focuses on social and ethnic groups, classes, gender interrelations, and the development of cultural and intellectual traditions. This approach offers provocative and often picturesque descriptions of Caribbean people, including unsung heroes among the working classes, and explains the strengths and versatility of contemporary Caribbean culture.

Contents
1. The Colonial State, Religion, and the Control of Labor: Jamaica, 1760-1834, by Mary Turner
2. Black Testators: Fragments of the Lives of Free Africans and Free Creole Blacks in Trinidad, 1813-1877, by Carl Campbell
3. The Wage Problem in Trinidad and Tobago, 1838-1938, by James Millette
4. Family Strategies, Gender, and the Shift to Wage Labour in the British Caribbean, by Bridget Brereton
5. Leisure and Society in Post-Emancipation Guyana, by Brian L. Moore
6. Colonial Images of Blacks and Indians in Nineteenth-Century Guyana, by Robert J. Moore
7. The Madeiran Portuguese Woman in Guyanese Society, 1830-1930, by M. Noel Menezes
8. Rice, Culture and Government in Trinidad, 1897-1939, by Glenroy Taitt
9. The War in Ethiopia and Trinidad, 1935-1936, by Kevin A. Yelvington
10. Non-Traditional Sources for the Study of the Trinidad Disturbances of the 1930s, by Brinsley Samaroo
11. "We Were Going to Found a Nation . . .": Dramatic Representations of Haitian History by Three Martinican Writers, by Bridget Jones


Bridget Brereton is professor of history and former head of the Department of History at the University of the West Indies, Trinidad campus. She is the author of Race Relations in Colonial Trinidad, 1870-1900; A History of Modern Trinidad, 1783-1962; and Law, Justice and Empire: The Colonial Career of John Corrie, 1829-1892.

Kevin A. Yelvington, associate professor of anthropology at the University of South Florida, is the author of Producing Power: Ethnicity, Gender, and Class in a Caribbean Workplace and the editor of Trinidad Ethnicity.

"Essays that suggest the sense of excitement that motivated Caribbeanists in the 1960s and 1970s, a time that can be considered something of a renaissance in West Indian historiography." - American Historical Review
--AMERICAN HISTORICAL REVIEW