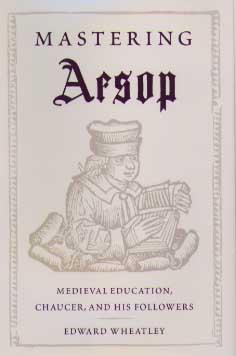 "This will be the magisterial treatment of an important element in high and later medieval pedagogy, which in turn is emerging as a key area of research for literary and cultural historians alike. . . . [The author] shows in lovely and complex detail just how a pedagogical tradition can produce quite directly some of the best works of art of an entire era."—Christopher Baswell, Barnard College and Columbia Graduate School


In this first study of a text from early childhood education that continued to exert its influence over major Middle English writers in their maturity, Edward Wheatley examines fable as a mode of discourse in its medieval curricular context and then discusses the ways in which it influenced the work of Chaucer, Lydgate, and Henryson.
Drawing on exhaustive study of over 100 manuscripts and several incunables of the fables, Wheatley traces the use of the standard medieval Latin fable collection across Europe, the constructions of Aesop that affected that use, and the scholastic commentaries that the collection inspired. He then describes how the medieval understanding of Latin curricular fable exerted its influence on both the matter and the art of Chaucer and on his followers.
Beyond his considerable contribution to the study of Latin influence on major vernacular writers of the English Middle Ages, Wheatley illuminates the curricular tradition in which they were trained and affords insights into numerous problematical issues at the heart of medieval literary study, such as the theory of translation and the nature of genre, author, and text.

Edward Wheatley, associate professor of English at Hamilton College, is executive editor of Sources and Analogues of Chaucer’s Canterbury Tales and the author of essays in Studies in the Age of Chaucer, Studies in Philology, and other publications.

"Lays out, in detail both engrossing and easy to grasp, the teaching of Aesop as a tool of rhetoric and writing in the medieval curriculum, and examines the work of the great poets -- Chaucer, Lydgate, and Henryson -- to show their adaptation of the fables for their own agendas." -Arthuriana
--Arthuriana

"Telling the truth about something as inherently fictitious and varied as fable is hard to do, but Wheatley makes a good job of it. His reading of the Nun's Priest's Tale, Lydgate's Isopes Fabules, and Henryson's Morall Fabillis are illuminating, and his argument for curricular influence upon poetry is most persuasive. More broadly this study will find resonance with several current preoccupations in medieval studies, principally children's literature, medieval literary theory, authority, and translation." - Medium Aevum
--Medium Aevum

"an efficient, thorough, and clear exposition of a rich and widely influential tradition of medieval textual commentary. Wheatley has built upon the foundations laid by A.J. Minnis and his associates, but has extended the study of literary theory in the Middle Ages to an area which, although previously largely overlooks, is evidently well developed and capable of highly sophisticated exploitation by writers of the day." - Review of English Studies
--Review of English Studies

"Mastering Aesop deploys considerable learning, theoretical sophistication (especially in its applications of Foucault and Bourdieu), and critical audacity in its attempt to situate the curricular fable and it commentary traditions accurately within medieval culture." "All in all, however, this is a study worth staying with (there are some slow spots) for anyone seriously interested in the influence of primary education's (Latin) culture on late-medieval vernacular literary production." - Speculum
--Speculum

Wheatley contributes notably to our knowledge of the medieval classroom and its possible impact on the rhetorical, cognitive, and literary development of poets. " - Envoi
--Envoi

certain to become a standard work in the field, widely read not only by historians of the fable but by anyone with an interest in the contributions of elementary Latin education to the formation of vernacular cultures in the late Middle Ages. . . . An important book, dealing responsibly and imaginatively with a part of the late medieval intellectual enterprise that has too long gone neglected; Mastering Aesop is well worth reading, and it can be hoped that Wheatley's work exercises the influence it deserves to have.
--JOURNAL OF ENGLISH AND GERMANIC PHILOLOGY