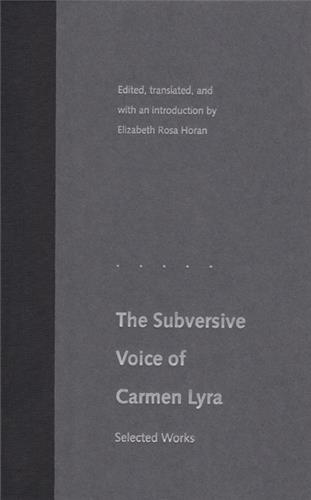 "Carmen Lyra's marvelous trickster tales wake the reader to a sharper understanding of 20th-century history. Lyra's stories and sketches--characterized by a sharp wit, wonderfully audacious candor and wry humor--help us reimagine the map of the Western Hemisphere."--Valerie Miner, University of Minnesota

"Carmen Lyra is one of many Central American women writers who were significant players in literary, intellectual, and political circles during their lifetimes but who have been studied and remembered less than they deserve. Recent scholarship is beginning to change this, and Horan's work is a welcome contribution to this effort. Her witty renderings into colloquial English of Lyra's folk and fairy tales are an invitation to read them aloud."--Janet Gold, University of New Hampshire

These Central American trickster tales and satirical and realistic stories by Carmen Lyra (the pseudonym of María Isabela Carvajal, 1888-1949) are the first translation into English of the writings of a leading revolutionary who was also an early 20th-century folklorist and children's writer. This volume presents her popular folktales, including her most famous work, Tales of My Aunt Panchita, alongside her influential social criticism. The familiar Central American folk character "Uncle Rabbit," derived from both African and Native American folklore, is featured in the tales, while her children's play, Christmas Fantasy, portrays another wily rabbit trying to pass as the Child Jesus.
Lyra's realism is represented by her satire of high society in "Tales of the Cothnejo-Fishy District," and her "Silhouettes from the Maternal School" describes the founding of Latin America's first Montessori kindergarten. She denounces the exploitation of workers in "Bananas and Men," while "Golden Bean" reveals crooked dealings in the coffee business.
Although Lyra's writings form the core of this book, the editor's essay offers important biographical information about an author and cultural milieu unfamiliar to many in the United States. Those readers interested in Latin American literature, women writers, and folktales will find this book interesting and informative. And the tales are simply wonderful reading!

Elizabeth Rosa Horan is director of comparative studies in
literature and associate professor of English at Arizona State University. She is the author of the award-winning Gabriela Mistral: An Artist and Her People and the translation editor (with Marjorie Agosin) of House of Memory: Short Stories by Latin American Jewish Women Writers.