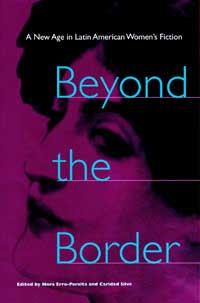 Beyond the Border:
A New Age in Latin American Women's Fiction

"What turns the head is the tone of some of these stories. It is as if someone were whispering directly into your ear, catching you by the sleeve to make you sit down and listen. . . . A strong and varied collection [that seems] to be cut from the same cloth. They are writers, but also scholars, editors, teachers, sisters, mothers, wives and grandmothers—women living several lives at once."—San Francisco Examiner

This collection of 15 vibrant short stories showcases a rich and important body of fiction by Latin American women, including acclaimed writers such as Isabel Allende and Luisa Valenzuela as well as dynamic new voices. Ranging across boundaries of geography and gender, the stories deal with a variety of subjects--incest, race, politics, sexual needs, love, old age, and child abuse--and incorporate a variety of narrative forms.

This edition features a new foreword by the celebrated Mexican author Elena Poniatowska, a new story by Nélida Piñón, winner of the prestigious Rulfo Award, and a new critical introduction that highlights the history of Latin American women’s writing from the 16th century to the present. Also included are a commentary on each story, biographical sketches of each author, and an updated annotated bibliography of Latin American women writers.

One of just a handful of anthologies of short stories in English by Latin American women, the collection is both a literary compendium and a desktop reference.

"Although the present volume will appeal to both specailists and nonspecialists, page for page the updates represent minimal new content over the older edition. Recommended for comprehensive collections only." - Choice
--Choice

"will make a splendid reader for academic and non-academic audiences. Its structure makes this volume particularly suitable for classroom use, but it may also be a nice bedside reader for anyone interested in Latin American women's fiction." - Letras Femeninas
--Letras Femeninas