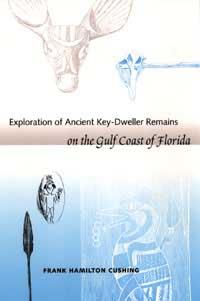 "The problem with Cushing is that he was 100 years ahead of his time. . . . Cushing was the first American archaeologist to interpret artifacts and archaeology from a cross-cultural ethnographic perspective. He caught hell from his contemporaries for doing this, but this is what we do today."--Randolph J. Widmer, University of Houston

"Frank Cushing was one of the brightest and most accomplished scholars of American Indian culture of his day. The book contains incomparable descriptions of a remarkable site and its artifacts, and it is historically important because of Cushing’s innovative integration of ethnographic and archaeological knowledge."--William H. Marquardt, Florida Museum of Natural History


First published more than 100 years ago, this illustrated monograph on the Key Marco site on Florida’s Gulf Coast reports on archaeological discoveries that have never been duplicated. At one time work at the site was considered the most important excavation on earth and, until 1970, it was considered the most advanced work in archaeology anywhere in the United States.
Frank Hamilton Cushing was the first person to use the term chiefdom to refer to prehistoric aboriginal culture, a term that wasn’t reintroduced to the literature until the 1970s. Equally amazing, Cushing actually attempted to explain the emergence of the sociopolitical complexity that he excavated.
No other site in the Southeast has revealed so many wooden and perishable cord artifacts, particularly from such a wide cultural range, including utilitarian, subsistence extraction, sociopolitical artifacts, and religious artifacts. Today, many of the pieces or their replicas are on display in local museums, excavations at Key Marco continue, and ecotours regularly visit the site.

Frank Hamilton Cushing (1857-1900) published his first scientific paper at age 17 and became a curator in the Smithsonian Institution’s Bureau of Ethnology at the age of 19. He was one of the first professionals to live with the people he was studying, and his work at Key Marco and with the Zuni Pueblo in New Mexico place him in the forefront of late-19th-century anthropology.

"The University Press of Florida is to be commended for its reprinting of this scarce and long out print Cushing volume, and for having Widmer write such an excellent contextual introduction for the reprinted volume." - Mark Barnes, Southeast Regional Office