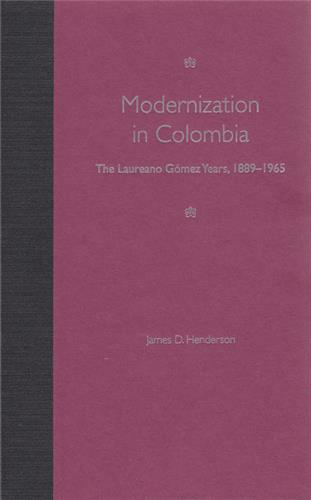 "The research involved in putting this manuscript together is truly awesome and involves a major synthesis of Colombian political, economic, urban, and social history which has not been achieved to date either in Spanish or in English."-- Maurice P. Brungardt, Loyola University of New Orleans

"Henderson's life-and-times study of Laureano Gómez provides a cogent analysis of a rapidly modernizing Colombia as well as a vivid portrait of one of the most powerful 20th-century Latin American conservative thinkers and politicians."-- Jane M. Rausch, University of Massachusetts, Amherst

The life of Laureano Gómez (1889-1965), Colombia’s combative Conservative politician and reviled public figure, serves as the backdrop for this modern history of one of the hemisphere's least understood nations. Tracing the complex process of development in Colombia, James Henderson explores the civil violence that defined the Gómez era even as the country experienced economic growth unparalleled in the rest of the Americas.

Gómez was a consummate debater, a spellbinding orator, and an influential newspaper editor. Early in his career he was a thorn in the side of Liberals and Conservatives alike, while in later years he led the Conservative opposition in Congress. He made and unmade presidents, served as president himself, and all the while figured prominently in Colombia’s transition to modernity.

Henderson gives us the best and worst of Gómez and his adversaries during this era, a time of alternating political peace and progress, punctuated by spells of extremist invective and bloody violence. Thus he shows that much of recent Colombian history is rooted in developments from the Gómez years.

Few Colombians can speak calmly of Gómez, and many blame him for the violence that plagued the country from the mid-1940s to the mid-1960s. Henderson’s objective and thorough discussion exposes the myths and assumptions surrounding Gómez and offers especially effective analysis of his writings, speeches, congressional debates, and editorials (as well as his rejoinders, one-liners, and put-downs, classics in the lexicon of Colombian history). Henderson also chronicles the titanic political rivalry between Gómez and Alfonso López Pumarejo, an arch-Liberal, showing how the two men who began their careers as friends became bitter enemies and ultimately led Colombia into the fratricidal civil war known as La Violencia.
This important history of Colombia’s political, economic, urban, and social life will become the definitive study of the nation during its critical period of modernization.

James D. Henderson, professor of international studies at Coastal Carolina University in Conway, South Carolina, is general editor of A Reference Guide to Latin American History. He has written two other books on 20th-century Colombia, both best-sellers in their Colombian Spanish-language editions.

"this is a sweeping narrative history covering politics, economics, society, and culture over a long period of some eight decades. These pages are smothered in facts. Henderson writes fluidly and engagingly, using felicitous phrases and telling descriptions. Whether or not this historian is writing for his colleagues, we all must reckon with his book. Those outside the academy interested in a serious and professional account of Columbian history will be able to read these unencumbered pages with pleasure." - American Historical Review
--American Historical Review

"Fine, stimulating work that makes a valuable contribution to the historiography and deserves to be read and discussed widely among scholars of Latin America."
--HAHR