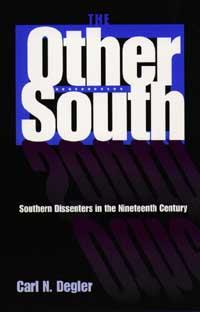 The Other South
Southern Dissenters in the Nineteenth Century

"[This] product of meticulous attention to historical detail plus a grasp of American history that enables the author to discern patterns from a mass of information . . . should permanently destroy the notion of the South as a 19th-century monolith."--Journal of American History

"An important and insightful book on a neglected subject in American political and social history. It adds not only to our understanding of ‘the other South,’ but also contributes to our awareness of the other America which the 19th-century South represented."--Political Science Quarterly


Carl Degler argues that if one is to understand who southerners were and are today, southern dissent of the 19th century must be understood and appreciated, since those years shaped southern ideas, customs, and values. The Other South highlights white men and women of the 19th century who challenged the domination of slavery in the region, objected to the disruption of the American Union, strove to change the politics and economy of the South during Reconstruction, and worked to displace the dominant Democratic party with the Populist party.

While earlier studies suggest the presence of individual southern dissenters, Degler’s work broadens the story to include a large number of hitherto unknown individuals and to illustrate not only the variety and complexity of southern dissent but also the broad patterns of dissent across the whole century. By linking and comparing these dissenting groups, Degler reveals underlying and important convictions among southern dissenters as well as the conflicts that beset white southerners who felt compelled to resist or deny the views of the majority.

Drawing on extensive historical literature and a wealth of manuscript material, Degler shows the diversity of southern experience in the 19th century and explores who the dissenters were. He examines the grounds for their opposition and points to patterns of opinion far different from the long-held image of a monolithic Old South.

Carl N. Degler is Margaret Byrne Professor of American History, emeritus, at Stanford University and past president of the Southern Historical Association and the American Historical Association. His publications include Place Over Time: The Continuity of Southern Distinctiveness and Neither Black Nor White: Slavery and Race Relations in Brazil and the United States.

"[This] product of meticulous attention to historical detail plus a grasp of American history . . . should permanently destroy the notion of the South as a 19th-century monolith."
--Journal of American History