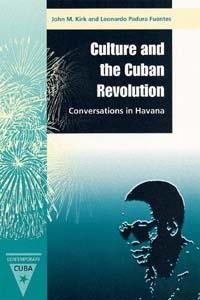 Culture and the Cuban Revolution:
Conversations in Havana

"[This book] is well done and timely, and it can have an influential role to play in bringing knowledge about Cuban culture to a wide audience at what might be an important turning point in U.S.-Cuban relations."--David Foster, Arizona State University

"A panoramic vision of Cuban culture through interviews with its various exponents, this book raises key questions about the complex relationship between the state and national cultural production."-- Monica Escudero, Simon Fraser University


This unusual collaboration between a Cuban novelist and a Canadian professor offers uncensored and frank interviews with prominent figures of contemporary Cuban cultural life, from a Grammy-winning jazz artist to world-class filmmakers and actors, writers, ballet dancers, and dramatists.

In recent years the small island, with a population of just 11 million, has experienced an astonishing cultural renaissance. The immense popularity of the movies Buena Vista Social Club and Strawberry and Chocolate, the successful international tours of the National Ballet of Cuba, and a host of literary prizes in Spain and Latin America all attest to this phenomenon.

The thirteen people interviewed played a leading role in cultural life during the years of the revolutionary process and today are considered official Cuban figures. They discuss a range of topics--their own work and limits on it, the challenge of producing art in a poor country, and threats of censorship. All state categorically that they feel a profound sense of national identity and an acute awareness of their role as cultural symbol.

Together, these candid interviews offer a unique perspective on the artist and intellectual in socialist society and an overview of the dynamic expression of popular culture in Cuba today.


John M. Kirk, one of the world’s leading Cuba specialists, is professor of Latin American studies at Dalhousie University in Halifax, Canada. He is the author of Between God and the Party: Religion and Politics in Revolutionary Cuba and José Martí, Mentor of the Cuban Nation and the coauthor of Canada-Cuba Relations: The Other Good Neighbor Policy (all published by UPF).

Leonardo Padura Fuentes, one of the most important writers working in Cuba today, is the prize-winning author of four novels, including Máscaras and Paisaje de otoño. He has also edited two books of interviews, one with salsa musicians and another with Cuban baseball players, and his work has been translated into Italian and English.

"In short, this delicious book has the virtue that its subjects approach us with intimacy and they prepare readers to penetrate their work and that of others, while at the same time it brings us the fascinating culture of a creative and sophisticated people whose goal remains to be cultured in order to be free."
--New West Indian Guide

Between God and the Party: Religion and Politics in Revolutionary Cuba
Healthcare without Borders: Understanding Cuban Medical Internationalism
Canada-Cuba Relations: The Other Good Neighbor Policy