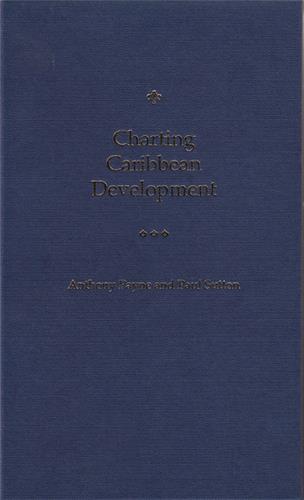 "The most important book on the topic [and] an original analysis based on decades of first-hand research and teaching. . . . It will be a fundamental reference book for those practically involved in government and in economic policy making."--Alistair Hennessy, University of Warwick

"An informed and perceptive account of macroeconomic theorizing and policy implementation in the Commonwealth Caribbean."--Anthony P. Maingot, Florida International University


This book offers an urgent commentary on the experience of Caribbean development in the postcolonial era, a critical discussion of the current crisis of globalization in the region. Specifically, it examines the different national models of development that have been pursued in the past forty years in Anglophone Caribbean countries such as Jamaica, Trinidad and Tobago, Barbados, and Grenada.
In addition, the coauthors address problems of integration and examine the region's main external linkages to Europe and North America that affect its development opportunities. They also present remarkably lucid accounts of the complex and tangled issue of the banana controversy, the role of U.S. fruit multinationals, and the role of the World Trade Organization in addressing these sorts of issues.
Not only for Caribbean specialists, this book will be valuable for those concerned with international political economy and development problems generally.

"The volume's introduction alone is worth the price of admission, and it should help to guide a focus the theoretical and practical discussion concerning the future of Caribbean economies. The authors' critical yet forward-looking perspective is one of the best reviews of the development debate as it affects the region that this reviewer has read." "These chapters provide a wealth of important material and historical data that students and scholars alike should find invaluable. Highly recommended." - Choice
--Choice

" A splendid study of the various plans and approaches during the past forty years as the optimistic hopes of the early independent years of the 1960s succumbed to the dismal realities at the beginning of the twentieth century. It is a complex story, but the authors have skillfully managed to create clear contours of the policies, plans, and programmes that periodically sought to redress the perceived social and economic problems."
--Cambridge Journlas Latin American Studies

"In sum, this work is a powerful intellectual treatise on the political and economic development of the contemporary Caribbean that offers implications for issues the region's political elites will have to face as they contend with challenge and cope with change in the future history of vulnerable states in a subordinate region."
--New West Indian Guide