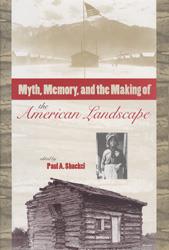 Myth, Memory, and the Making of the American Landscape

Edited by Paul A. Shackel

"Penetrating insight into the processes by which our collective historical memory is constructed. Through a range of case studies, the authors explore how and why certain landscapes and monuments are intentionally endowed with specific messages, why certain stories are obscured or forgotten, and how collective memories change over time." --James Delle, Franklin and Marshall College


The authors in this collection show how the creation of a collective memory of highly visible objects and landscapes is an ongoing struggle, their meanings always being constructed, changed, and challenged. The sites and symbols the authors address are nationally recognized and include a balance of places that illuminate class, ethnic, racial, and historical experiences. Focusing on material culture, they explore the tensions that exist among various groups--elite landowners, the National Park Service, preservationists, minority groups--who compete for control over the interpretation of American public history.

Foreword, by Edward T. Linenthal
Introduction: The Making of the American Landscape, by Paul A. Shackel
Part I: An Exclusionary Past, by Paul A. Shackel
1. Of Saints and Sinners: Mythic Landscapes of the Old and New South, by Audrey J. Horning
2. The Woman Movement: Memorial to Women's Rights Leaders and the Perceived Images of the Women's Movement, by Courtney Workman
3. The Third Battle of Manassas: Power, Identity, and the Forgotten African-American Past, by Erika K. Martin Seibert
4. Remembering a Japanese-American Concentration Camp at Manzanar National Historic Site, by Janice L. Dubel
5. Wounded Knee: The Conflict of Interpretation, by Gail Brown
Part II: Commemoration and the Making of a Patriotic Past, by Paul A. Shackel
6. Freeze-Frame, September 17, 1862: A Preservation Battle at Antietam National Battlefield Park, by Martha Temkin
7. The Robert Gould Shaw Memorial: Redefining the Role of the Fifty-Fourth Massachusetts Volunteer Infantry, by Paul A. Shackel
8. Buried in the Rose Garden: Levels of Meaning at Arlington National Cemetery and the Robert E. Lee Memorial, by Laurie Burgess
Part III: Nostalgia and the Legitimation of American Heritage, by Paul A. Shackel
9. Authenticity, Legitimation, and Twentieth-Century Tourism: The John D. Rockefeller, Jr., Carriage Roads, Acadia National Park, Maine, by Matthew M. Palus
10. The Birthplace of a Chief: Archaeology and Meaning at George Washington Birthplace National Monument, by Joy Beasley
11. Nostalgia and Tourism: Camden Yards in Baltimore, by Erin Donovan
12. Abraham Lincoln's Birthplace Cabin: The Making of an American Icon, by Dwight T. Pitcaithley

Paul A. Shackel, associate professor of anthropology at the University of Maryland, is the author of Archaeology and Created Memory: Public History in a National Park; Culture Change and the New Technology: An Archaeology of the Early American Industrial Era; and Personal Discipline and Material Culture: An Archaeology of Annapolis, Maryland, 1695-1870.

"'Myth, Memory, and the Making of the American Landscape' clearly demonstrates the power of memory and historical 'fact' in shaping contemporary society and politics. In so doing, it illustrates the importance of seeking out the multiple histories that surround the sites and landscapes that we study." - Historical Archaeology
--Historical Archaeology

" This is an important and well-organized collection that raises meaningful questions about the nature of national identity, the manipulation of public memory and the social and political role of public history.
--American Studies International

" The essays offer some salient lessons about the ways in which "highly visible objects are always being constructed, changed, challenged, or ignored". "
--Journal of American History

"A wealth of information of value to academics and practitioners in the areas of museology, national landscaping, archaeology, and American studies."
--Social Anthropology

The Archaeology of American Labor and Working-Class Life