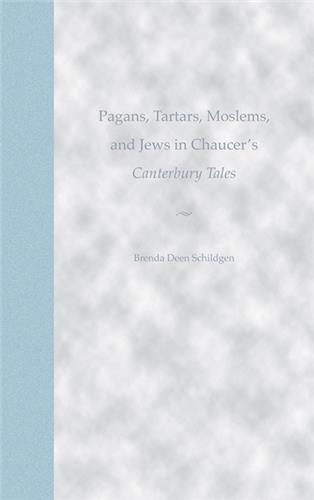 "Schildgen reads the Canterbury Tales as a work of complex speculation about identity, values, and social arrangements. Her book focuses on the margins where these concerns emerge with special clarity and urgency--in the tales conspicuously located outside a Christianized Western Europe."--Robert R. Edwards, Pennsylvania State University


Brenda Deen Schildgen takes a new path in Chaucer studies by examining the Canterbury Tales set outside a Christian-dominated world--tales that pit Christian teleological ethics and history against the imagined beliefs and practices of Moslems, Jews, pagans, and Chaucer’s contemporaries, the Tartars.
Schildgen contends that these tales--for example, the Knight’s, Squire’s, and Wife of Bath’s--deliberate on the grand rifts between the Christian or pagan past and Chaucer’s present and between other cultural worlds and the Latin Christian world. They offer philosophical views about what constitutes “wisdom” and “lawe” while exploring alternative moral attitudes to the Christian mainstream of Chaucer’s time. She argues that their presence in the Canterbury Tales testifies to Chaucer’s literary secularism and reveals his expansive narrative interest in the intellectual and cultural worlds outside Christianity.
Making impressive use of medieval intellectual history, Schildgen shows that Chaucer framed his tales with the diverse philosophies, religions, and ethics that coexisted with Christian ideology in the late Middle Ages, a framework that emerges as political and not metaphysical, putting these beliefs deliberatively in the context of literary discourse, where their validity can be accepted or dismissed and, most important, debated.

Brenda Deen Schildgen teaches comparative literature, medieval studies, and English at the University of California, Davis. She is the author of several books, including Power and Prejudice: The Reception of the Gospel of Mark, which won a Choice Award for most outstanding academic book in 1999, and is the coeditor of The Decameron and the Canterbury Tales.

"a useful addition to Canterbury Tales scholarship. She explores the varying views presented by these eight stories and makes her points through both extensive notes and a bibliography. Pagans, Tartars, Moslems, and Jews in Chaucer's "Canterbury Tales" provides invaluable insight into the medieval English, and by extension European, view of Islam." - American Journal of Islamic Social Sciences
--American Journal of Islamic Social Sciences

"Schildgen offers engaging readings of the seven tales set outside the Christian-dominated world… sets a high standard of reading competency and discusses pagan philosophy accessibly. Her perspective is timely, her case well-argued, and the effect provocative." - Notes & Queries
--Notes & Queries

"The real contribution of the book lies less in its treatment of Chaucer's faraway places that in its suggestion that the early Christian past is itself 'another country'. Schildgen ingeniously suggests that such tales as the Second Nun's life and passion of Cecilia revert to a late classical situation in which Christians themselves are represented as other, actively engaged in an attempt to move from outside to inside by creating a new centre of authority from the periphery of the pagan world." - London Review of Books
--London Review of Books

"This simulating book is a lively, learned, and provocative contribution to the continuing discourse on the pilgrimage to canterbury."
--Speculum

" A meticulously researched and thoughful book, a valuable introduction to the study of late medieval ideas about pagans, Moslems, Tartars, Jews, and (old-and new-fashioned) Christians." ; "Schildgen offers a rare and useful study of alterity per se. The fact that she is admirably well-informed, drawing with apparent ease from a broad range of medieval and modern texts, makes her analysis particularly welcome."
--Cultural Pluralism in Chaucer's Canterbury Tales