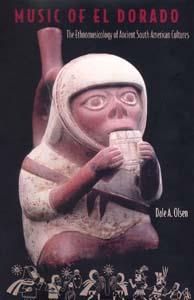 
"An adventurous quest to understand the flutes of the ancient Americans of the Andes. In learning how the instruments may have been played, we are taken on a journey through contemporary and age-old rituals, to discover an aesthetic part of a culture known more for its monuments and its precipitous fall to the Spanish."--Donald R. Hill, State University of New York, Oneonta

"A fascinating exploration . . . both stimulating and provocative . . . adds an entirely new dimension to our understanding of the pre-Hispanic Andes."--Richard L. Burger, Peabody Museum of Natural History, Yale University

In the first comprehensive synthesis of Andean musical instruments, Dale Olsen breathes life and humanity into the music making of pre-Hispanic cultures in the northern and central Andes. He assesses three decades' worth of anthropological findings from diverse collections, museums, tombs, and temples.

Although the instruments, ranging from the ceramic flutes of the Sinu and Tairona and the panpipes of the Paracas and Nasca to the Moche's rattles, drums, and conch shell trumpets are analyzed in great detail, Olsen's is original among studies of pre-Columbian music in that it takes an interpretive rather than a purely descriptive approach. What did music mean in the lives of these pre-Columbians? Part musical quest, part adventure of the mind, he considers not only why and when the instruments were played, but exactly how.

Enhancing the text are fascinating illustrations of more than 80 archaeological musical instruments and ancient artifacts, many never before reproduced in books available in the United States.

Dale A. Olsen is Distinguished Research Professor of ethnomusicology and director of the Center for Music of the Americas at Florida State University.

"a fascinating exploration into the use, meaning and sounding of ancient American wind instruments" - Sing Out!
--Sing Out!

"Adds significantly to our understanding of how music fits into visionary spirituality past and present."
--Antiquity

Music of the Warao of Venezuela: Song People of the Rain Forest