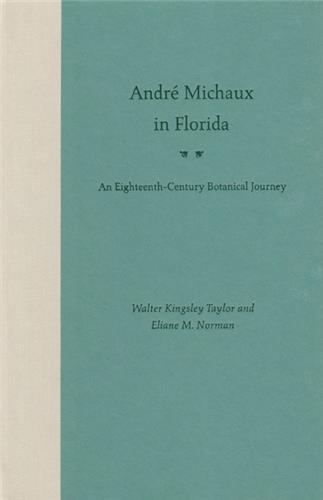 "Botanists, historians, and amateur naturalists alike will delight in this meticulous telling of Andre Michaux's journey in Florida. Michaux's passion for discovery is brought to light through a wonderful recounting of the rigors of eighteenth-century exploration and collection, dealings with local officials, and collaboration with such American naturalists as William Bartram."--David Taylor, Converse College, Spartanburg, South Carolina

"The appeal of Andre Michaux in Florida lies in its interest and usefulness to both professional and amateur botanists, horticulturalists, gardeners, field naturalists, and historians."--Ronald L. Stuckey, Museum of Biological Diversity, Ohio State University

The name Michaux often appears in the plant names of Florida, from the endangered yellow violets that grow wild in the panhandle to the Florida rosemary of the scrub. Andre Michaux (1746-1803) was one of the most extraordinary and dynamic individuals of early explorations in North America and the first trained botanist to explore extensively the wilderness east of the Mississippi River, including Spanish East Florida. This first book-length account of Michaux's Florida exploration combines his original journal with writings about him by later authors, historical background, and the author's own narrative to create a multifaceted, comprehensive treatise on Michaux's travels and discoveries in Florida.

Beginning with a biographical sketch on the life of Andre Michaux, royal botanist for King Louis XVI of France, the authors retrace (using 16 maps) the exploratory routes he took in Florida and recount historical events occurring in Florida at the time. They include in full documentary form all the plants he discovered, collected, and observed and fully assess his findings so that his contributions can now be evaluated along with those of better-known botanists of whom much has been written, such as John Bartram and his son William--who acknowledged the Frenchman's abilities, writing that Michaux could traverse the same ground that he and his father had covered and find plants that they had missed.

From a historical as well as a botanical perspective, Andre Michaux in Florida re-creates the Florida exploration of a remarkable explorer and observer and allows us to experience vicariously the vibrancy and joy of his journey of discovery.

Walter Kingsley Taylor is professor of biology at the University of Central Florida, Orlando.

"Taylor and Norman effectively make the case for Michaux's scientific reputation." "this book makes a bold start at restoring the significance of his botanical record to the history of science."--ISIS
--ISIS

"Taylor and Norman have provided a volume useful to specialists on Florida's historical biological diversity. The volume will also be of use to scholars of the late colonial period in Florida, especially those interested in environmental history. Michaux's descriptions of the landscape, combined with the excellent maps, paint a picture that many will no doubt relate to their own experiences on the St. John's River as well as the Indian River and Mosquito River lagoons along Florida's central East Coast."
--H-Net Reviews