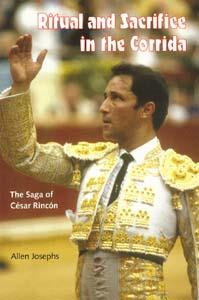 Ritual and Sacrifice in the Corrida
The Saga of César Rincón

"Brilliant, flowing prose makes the often unknown and misunderstood spectacle of bullfighting comprehensible, vibrant and even impassioned to a general readership. . . . With this tremendous and impressive investigative work, Josephs' contribution to the true cause of bullfighting will be far greater than even Hemingway's Death in the Afternoon."--Muriel Feiner, author of La Mujer en El Mundo del Toro

"A beautifully written book, dripping with the beauty of the Spanish earth, and its action paragraphs vibrate with the details of Spain's ancient, mysterious pageant of nobility and passion. In this adventure, we the reader come to know the heroism and courage of both bull and torero, and we experience the tragic catharsis of the doomed and dying toro. This book will instantly join the limited list of modern classics of the Spanish corrida."--Donald Junkins, University of Massachusetts, Amherst, author of Journey to the Corrida

Probably no other Western tradition has greater force to deflect understanding and provoke aesthetic scrutiny than the Hispanic corrida, or bullfight. In Ritual and Sacrifice in the Corrida, Allen Josephs paints an accurate and intimate portrait of life in and around the world's most prestigious bullrings to demonstrate how and why the corrida remains a sacred and integral part of Hispanic culture.

Josephs' unromanticized account is the result of four seasons spent on the corrida circuit with Cesar Rincon, the most esteemed matador in Colombia. Following Rincon through Spain, France, and South America, through the highs and lows of his career, Josephs develops a close and privileged relationship with him and is able to reveal an insider's view of the bullfighter's life and of the Fiesta Brava ("Wild Feast") itself, never seen by the spectator.

From his boyhood in the slums of Bogota to his extraordinary breakthrough 1991 season in Madrid, Rincon is challenged not only by the bull but by the circumstances of his life. A national hero in his native Colombia, he is nevertheless the subject of frequent prejudice as a non-Spanish matador. Recreating the atmosphere of life on the road, Josephs details all-night drives across the Spanish countryside, meals in roadside cafes, and conversations with fellow aficionados and taurine writers. Readers come away with not only an understanding of the art of bullfighting, but an appreciation of Spanish culture, society, and its psychology and traditions.

Drawing on more than 30 years of personal participation in the culture of the Spanish Fiesta Brava, Josephs brings an intimate knowledge of taurine technique to his account. Over 150 photographs, most in full color, enhance the text. The reader is in the ring with Cesar Rincon, both visually and textually, through afternoons of great peril and of great triumph. Through this experience, Josephs conveys the deep, abiding--and ultimately mythic and religious--significance of such afternoons and why this ritual still flourishes today as it has for centuries.

Allen Josephs is a world-renowned Hemingway scholar and past president of the Ernest Hemingway Foundation and Society. He has been a University Research Professor at the University of West Florida since 1986.

"to be savored slowly and remembered." "For taurine bibliophiles, it is sure to be a classic." - La Busca
--La Busca

"Always engaging, Josephs' romanticized accounts of the matador's life may not convert the opposed, but it will reveal some of the beauty behind the brutality." - Booklist
--Booklist

The Insistence of Harm
White Wall of Spain: The Mysteries of Andalusian Culture
Only Mystery: Federico Garcia Lorca's Poetry in Word and Image