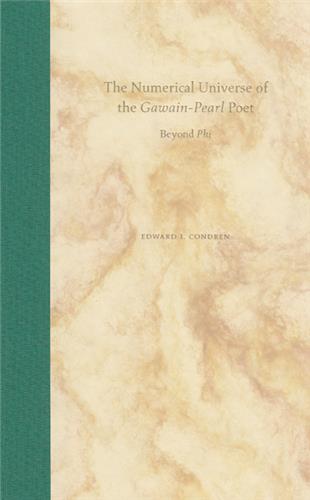 The Numerical Universe of the Gawain-Pearl Poet
Beyond Phi

"The first study to go beyond simple number symbolism and systematically embrace not only thematic elements but the construction of the entire manuscript in a fashion that credibly explains a number of puzzling elements ranging from the serial arrangement of the poems to the placement of decorated initials in the manuscript. . . . probably the most interesting, challenging , and provocative study of the Pearl poems written in the last two decades."--Julian Wasserman, Loyola University of New Orleans

Edward Condren examines the manuscript of the Gawain-Pearl Poet in the light of a compositional method well recognized from the literature of ancient Greece and Rome through the Renaissance but largely overlooked by modern criticism. Arguing that the manuscript is a single integrated artifact and not merely a collection, he shows that it is held together, as is the universe, by mathematical equations called the Divine Proportion in the Middle Ages and phi by modern mathematicians. More than a critical study of four poems in a manuscript, Condren's detailed discussion of numeric theory reveals the medieval way of understanding the created universe in neo-Pythagorean and Platonic terms, and it underscores the importance of the quadrivium in the medieval view of an ordered universe.

Drawing on medieval theories of proportion and harmony, Condren shows that the manuscript is more intricately designed and presented than anyone has yet recognized and that the poet who created this work was better educated and more self-consciously brilliant than most have imagined. He argues that the order in which the poems appear--with the two poems set in the Middle Ages placed at the beginning and end of the manuscript and the two set in the Judaic era located at the manuscript's center--allows the literal narratives to exfoliate historically from the Old Testament world, through the era of the New Testament, and implicitly to the salvation that lies beyond. Working poem by poem, Condren details the mathematical forms governing the structure of the manuscript and guiding its progress, from the calculated use of decorated initials to sophisticated mathematics involving squares, primes, different counting systems, and geometrical schemes of the pentangle and ultimately the cross. Condren shows how the anonymous poet takes literally the scriptural statement that all things are disposed according to number, weight, and measure as a means to bridge the worlds of flesh and spirit. By fashioning a mathematically harmonious manuscript, suffusing it with the progressive development of theological belief, and placing its characters in the dilemmas of earthly living, Condren argues, the poet replicates the harmony of the universe and the difficulty human beings have in attempting to embrace it.

Edward I. Condren is professor of English at UCLA.

"Condren brilliantly argues that behind the seeming randomness of both the words and physical layout of the Pearl poems lies the mindfulness of a proportion or ratio that modern scientists call phi or that in the Renaissance was termed 'The Golden Section.' - Arthuriana
--Arthuriana

"A fine study for use by upper-level undergraduates, graduate students, and scholars of Cotton Nero A.x. The final chapter should prove especially helpful for those who want to upgrade their understanding of Sir Gawain for the purposes of undergraduate teaching." "In all, this highly recommended book is beautifully argued and expertly documented, a testament to the great care that the author applied to his work over seventeen years."
--ANQ

"Condren demonstrates, in a thorough and careful manner, the operation of the divine proportion or golden section, called "phi" by modern mathematicians, as the underlying structural principle of the manuscript and from this offers a coherent and useful paradigm for understanding the work."
--Speculum

"An important contribution both to scholarship on the Pearl Poems and to the study of numeric structuring in classical poetry . . . As well as the impact of late-antique thought on medieval poetry generally. The book is difficult to read at times . . . But once grasped, Condren's figures are too accurate to be ignored."
--International Journal of the Classical Tradition

Chaucer from Prentice to Poet: The Metaphor of Love in Dream Visions and Troilus and Criseyde