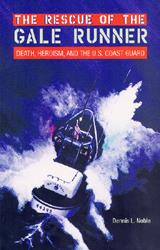 The Rescue of the Gale Runner
Death, Heroism, and the U.S. Coast Guard

"A scholarly examination of the problems facing the small boat crews of the twenty-first century, who are just as heroic as their predecessors, is long overdue. Noble allows the people who operate America's modern small rescue platforms to tell their own story. Lives were lost in a scenario that could have been prevented; why should we not ask the tough questions?"--John J. Galluzzo, Scituate Historical Society

This on-the-spot narrative of the February 1997 loss of three U.S. Coast Guardsmen from the Quillayute River Station during a maritime rescue is both a commemoration and a report of the failure of the Coast Guard's senior leadership to appreciate and support the work of enlisted men and women at often remote and dangerous small-boat stations.

The first in-depth look at a small-boat maritime rescue by the U.S. Coast Guard, this book is also the first to describe the role of those at small-boat rescue stations and of the policy setters at Coast Guard headquarters in Washington, D.C. Its author was in the right place at the right time on a night when everything went wrong. From the first alarm to the dramatic helicopter rescue of the crew of a foundering sailboat, from the onshore rescue of the sole survivor of the first dispatched Coast Guard crew to the tragic losses, this man-against-the-sea tale is told largely in the words of the participants and others who were with author Dennis Noble at the station near La Push, Washington, on the night the tragedy unfolded.

Noble also provides an analysis of the state of the Coast Guard, how its current problems have developed, and what effect they have on the service's operations. As the story unfolds, the views of senior enlisted personnel at the station paint a picture of an overworked small-boat rescue force and their feelings toward what they perceive as a distant, and in many cases unaware, officer corps. Noble contrasts these perspectives with those voiced by the investigating commissioned officers and higher-ups at Coast Guard headquarters.

Illustrated with 29 photos and maps, Noble's contribution to the annals of maritime history is a riveting account of extraordinary heroism in the face of regrettable human tragedy.

"Noble's on-the-spot experiences, his professional background and his established maturity as an historical writer make The Rescue of the Gale Runner as gripping an account of rescue efforts as the parallel work of Dennis Smith, retired New York firefighter and historical author who released the evocative Report from Ground Zero earlier this year." - Peninsula Daily News
--Peninsula Daily News

I highly recommend Denis Noble's book. The Rescue of the Gale Runner will give you a greater understanding and respect for what the men and women of the U.S. Coast Guard are asked to do and accomplish every day somewhere on the nation's waters."--U.S. Naval Institute Proceedings
--Proceedings