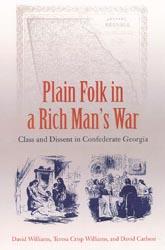 Plain Folk in a Rich Man's War:
Class and Dissent in Confederate Georgia

"A significant voice in a significant debate . . . full of marvelous quotes."--William W. Freehling, University of Kentucky

"Shows clearly that the Solid South was not solid at all [and] demonstrates that the war encompassed much more than military strategy and tactics . . . it was fought at home as well as on the battlefield."--Wayne K. Durrill, University of Cincinnati

This compelling and engaging book sheds new light on how planter self-interest, government indifference, and the very nature of southern society produced a rising tide of dissent and disaffection among Georgia's plain folk during the Civil War. The authors make extensive use of local newspapers, court records, manuscript collections, and other firsthand accounts to tell a story of latent class resentment that emerged full force under wartime pressures and undermined southern support for the Confederacy.

More directly than any previous historians, the authors make clear the connections between the causes of class resentment and their impact. Planters produced far too much cotton and avoided the draft at will. Speculators hoarded scarce goods and brought on spiraling inflation. Government officials turned a blind eye to the infractions of the rich, and were often bribed to do so. Women left to go hungry took matters into their own hands, stealing livestock in rural areas and rioting for food in every major city in Georgia. The hardships of families back home weighed heavily on soldiers in the field, contributing to rampant desertion. Deserters banded together, sometimes with draft dodgers and blacks escaping enslavement, to defend themselves or to go on the offensive against Confederate authorities. Some whites even planned and participated in slave resistance, a joining of forces that previous historians have long dismissed as highly improbable. So violent did Georgia’s inner civil war become that one resident commented, "We are fighting each other harder than we ever fought the enemy."

This work stresses more forcefully than any before it that plain folk in the Deep South were far from united behind the Confederate war effort. That lack of unity, brought on largely by class resentment, helped to ensure that the Confederacy’s cause would, in the end, be lost.

David Williams is professor and acting chair of the Department of History at Valdosta State University.

" An outstanding study of the impact of the war on Georgia's yeoman class, Plain Folk in a Rich Man's War is generally readable and absorbing." "A solid contribution to the growing debate over the impact of homefront dissent on the Confederacy's failure."
--Georgia Historical Quarterly

"a useful and strongly argued book" "it does make a worthy contribution to scholarship by providing a most illuminating look at a somewhat neglected aspect of the conflict."
--The North Carolina Historical Review

"...the current volume performs a valuable service in surveying the whole of a key Confederate state."-J. William Harris, University of New Hampshire
--The Journal of Southern History

"an excellent book. With the exception of those who only enjoy works on battlefields and generals, most readers of southern and Civil War history will find this book fruitful and engaging. It is well-written, and the quotations from diaries and letters are often pithy and eye opening."-Edward J. Blum, Baylor University
--H-South Digest

"an excellent book." "…ideally suited for undergraduate courses in Georgia history and the Civil War, while graduate seminars on the South or the Civil War would find it beneficial."
--H-South Digest

"By researching the less romantic aspects of military strategy and tactics, these historians, by evaluating meticulously what went on behind the Confederate lines and its impact upon the Southern attitudes of the plain folk can tell the Civil War historian even more why the war ended as it did." - Marshall Scott Legan, U. of Louisiana at Monroe
--Louisiana History

"emphasizing class conflict as a major contributor to dissent . . . This new study forcefully argues that disloyal attitudes, 'spawned by class resentment, were a major cause of Confederate defeat.'" " a considerable achievement"
--Civil War History