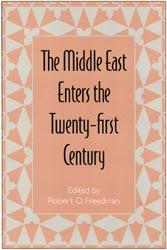 "Succinctly laying out the problems and prospects for the Middle East in the new century, Freedman's book will be widely read in classrooms across the country."--Glenn E. Robinson, Naval Postgraduate School

This collection analyzes the impact of the three major developments of the latter part of the 20th century on the future of the Middle East in the 21st century: the Arab-Israeli peace process, the 1979 Islamic revolution in Iran, and the Iraqi invasion of Kuwait. Contributors treat Egypt, Israel, Jordan, the Palestinians, Syria, Lebanon, Iraq, Iran, Turkey, and the Arabian Peninsula, with additional chapters on U.S. and Russian policy, exploring the impact of outside powers on the region. An epilogue discusses the impact of the terrorist attacks of September 11on the region and the efforts of the United States and the European Union to build an antiterrorist coalition in the Arab world while at the same time seeking to devise a solution for the Israeli-Palestinian conflict. Combining contributions of scholars from many different countries and a rich mixture of viewpoints, this book is the first to provide both a comprehensive view of the Middle East at the turn of the century and an outline of the directions that its component states and peoples are likely to pursue in the years ahead.

Contents
Introduction
Part I. The Persian Gulf and Turkey
1. The Legacy of Iraq's Past and the Promise of its Future, by Judith Yaphe
2. Iran: Slouching Toward the 21st Century, by Shaul Bakhash
3. The Arabian Peninsula Monarchies from Camp David I to Camp David II, by F. Gregory Gause III
4. From Swamp to Backyard: The Middle East in Turkish Foreign Policy, by Malik Mufti
Part II. The Arab-Israeli Core Area
5. Israel Enters the 21st Century: Hegemonic Crisis in the Holy Land, by Ilan Peleg
6. The Palestinian National Movement: From Catastrophe to Disaster, by Barry Rubin
7. Jordan: Walking a Tightrope, by Yehudah Lukacs
8. Flanks, Balances, and Withdrawals: The Parameters of Syrian Policy in the Middle East since the 1979 Egyptian-Israeli Peace Treaty, by David W. Lesch
9. Lebanon Since 1979: Syria, Hezbollah, and the War Against Peace in the Middle East, by Marius Deeb
Part III. Egypt and North Africa
10. Egypt: Moribund Between Past and Future, by Louis Cantori
11. Militant Islam and the State in North Africa, by Mary-Jane Deeb
IV. The Outside Powers
12. U.S. Policy Toward Israel, by Don Peretz
13. Russian Policy in the Middle East under Yeltsin and Putin , by Robert O. Freedman
Epilogue. The Bush Administration, the European Union, and the Arab-Israeli Conflict: The Impact of September 11