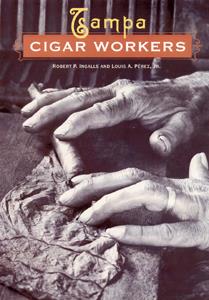 "Combining powerful images with compelling quotes, Ingalls and Perez capture the extraordinary world the cigar workers created and the imprint it has left on the historical landscape even after its demise."--Nancy A. Hewitt, Rutgers University

"An inspiring and deeply moving account of how immigrant tobacco workers from Cuba, Spain, and Italy arrived and created communities in the Tampa Bay area . . . accompanied by a remarkable collection of historic photographs of Tampa's cigar workers."--Gerald E. Poyo, St. Mary's University

From the founding of Ybor City in 1886 to the dispersal of Tampa's Latin population in the years following World War II, this book documents the history of the Cuban, Spanish, and Italian immigrants who created the cigar industry in Tampa and the extraordinary multi-ethnic community that flourished around it. Over 200 photos capture this community's personalities and way of life while commentary drawn from newspaper accounts, oral histories, and archival documents identifies and explains each photograph's historical place and significance. In linking the photographs with historical text, the authors allow the cigar workers to tell their own story, in the language of their day.

The rich photographic record around which the book is organized documents the lives of the immigrant cigar workers not only in the workplace but also in their vibrant neighborhoods in Ybor City and West Tampa. Highlighting the diversity of the cigar workers' community, the book depicts the making of cigars, the work culture, local support for the Cuban War of Independence (1895-1898), unions and strikes, community institutions such as mutual aid clubs, leisure activities, and social practices surrounding courtship, marriage, and death.

Focusing on the public spaces of work and society as well the private sphere of the home, Tampa's Cigar Workers tells an inspiring and deeply moving story of how immigrant cigar workers from Cuba, Spain, and Italy carved out their space in Tampa while struggling to survive economically and defending their ideals and way of life.

"We are very impressed by the recently released hardbound book Tampa Cigar Workers… The book is attractively laid out and is very enjoyable to read. We strongly suggest it to anyone who is interested in Tampa's history." - La Gaceta
--La Gaceta

"Tampa cigar workers were people of such strength and vision that their influence on Tampa endures to this day. Read 'Tampa Cigar Workers' to understand why so many native Tampa residents are proud to say they are the descendants of laborers who spent their days handling tobacco leaves- and building a better life for their families and the city." - Tampa Tribune
--Tampa Tribune

"The various images that fill the book and the timley quotes from contemporary sources and reminiscences that bolster these images make this collection a true treasure."
--Florida Historical Quarterly

"Popular history in its truest and finest form."
--H-net Reviews

Sunshine in the Dark: Florida in the Movies
Urban Vigilantes in the New South: Tampa, 1882-1936