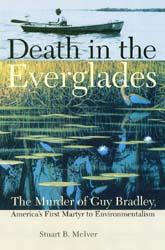 Death in the Everglades
The Murder of Guy Bradley, America's First Martyr to Environmentalism