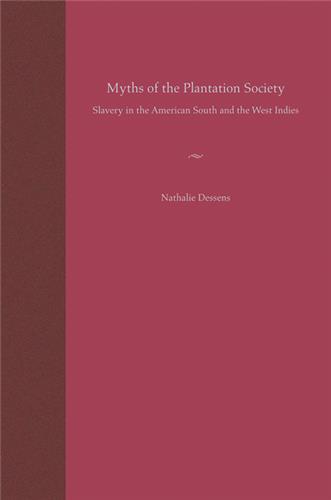 "A provocative explanation of how differences in slavery and later abolition movements produced different responses in post-abolition societies and contributed significantly to the creation of the southern myth."--Sylvia Frey, Tulane University

Providing new insights into the origins of benevolent myths about the Old South, Nathalie Dessens compares slave systems of the Caribbean and the American South from the early days of European colonization to the abolition of slavery.

Her uncommon combination of historical and literary scholarship in a broad comparative framework explains why these two slave societies of the Americas developed so differently. She shows that underneath apparently obvious similarities, evolution of southern society and its West Indian counterpart diverged markedly, notably during debates over the existence of slavery.

In both regions, climate and soil conditions favored the development of plantations that relied almost exclusively on the cultivation of such crops as cocoa, coffee, tobacco, cotton, indigo, and sugar and on the importation of other consumer goods. These agricultural economies required extensive manpower, and all colonial societies experienced a constant labor shortage. Both regions readily adopted the system of slavery. Dessens contrasts the institution in the West Indies and the American South, from codification and implementation to abolition and its aftermath. She also describes differences in both regions connected to their geography and varying status as territories.

Her examination illuminates the emergence of a cultural distinction of the American South. Both before and after emancipation, southerners found themselves defending their entire civilization, and the myth of benevolent plantation life--complete with paternal masters and contented slaves--was born. Southern fiction writers added their voices to the defense and wrote historical novels that glorified the Golden Age of the South. Dessens asserts that no parallel mythologizing existed in West Indian society, where plantation life was debunked rather than celebrated.

In addition to primary sources such as diaries and slave narratives, scholars will be especially fascinated by Dessens' use of travel narratives, a fashionable genre in the 18th and 19th centuries, some written by American colonists visiting other colonies of the Western hemisphere and others written by Europeans visiting the American colonies.

Nathalie Dessens is professor of American history and civilization at the University of Toulouse, France.

"Dessens explores the roots of southern American exceptionalism in the Atlantic world. Her merging of political, social, and intellectual history provides new insights on the interesting question of southern distinctiveness. Dessens's dual achievement is to use the West Indies as a mirror to reflect on the American South, and to see the larger issue in terms of the longue duree."
--Georgia Historical Quarterly

"This challenging book is bound to create extensive discussion in the academy (certainly in the South), and among those who see the South as different." "Highly recommended."
--Choice

"Dessen's simple and extremely convincing explanation of the origins of the Old South legend once again demonstrates the promise of a comparative approach."
--The North Carolina Historical Review

"Dessens draws on slaveholders' diaries, slave narratives, and travel narratives to provide a detailed comparative analysis of slavery (from genesis to abolishment) in both the West Indes and the American South."
--African American Review

…a major contribution to the understanding of contemporary differences and, to some extent, similarities between Blacks in the American South and in the Caribbean.
--New West Indian Guide

From Saint-Domingue to New Orleans: Migration and Influences